Review: Rainbows in the rain with Holly & Beau

The weather has been amazing over the last few weeks and it’s been AGES since it last rained, but there’s no denying it’s the end of September and autumn is just around the corner. And with autumn comes cooler temperatures, stronger winds and, of course, RAIN! 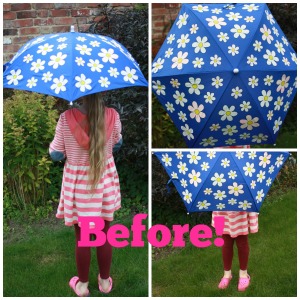 My daughter has no choice but to go out in the rain. Her brothers play football and rugby at the weekend and we spend all of Saturday and Sunday mornings on the touchlines, whatever the weather. Luckily, she doesn’t mind rain too much and is usually kitted out in top-to-toe waterproofs.

But sometimes it’s nice to just have that added bit of protection against the elements. Which is why she jumped at the chance to test out a colour-change umbrella from Holly & Beau. On contact with water, the designs on these fantastic umbrellas magically change colour – bringing rainbows in the rain! They change back again once they’re dry. My daughter chose the flower design, but I had my eye on the cats and dogs version. The umbrella also comes in a cupcake design. The umbrellas are a good size – bigger than your average kids’ umbrella. 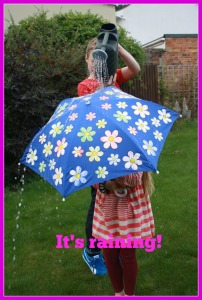 The umbrellas cost £14.99 and for every umbrella sold, the company will donate 20p to Rainbow Trust, which provides emotional and practical support to families of seriously ill children. 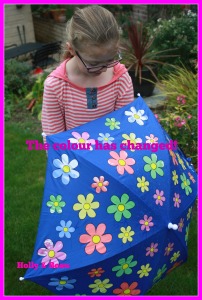 Holly & Beau was company was founded in 2012, one of the wettest years on record, to bring a bit of sunshine back despite the rain! 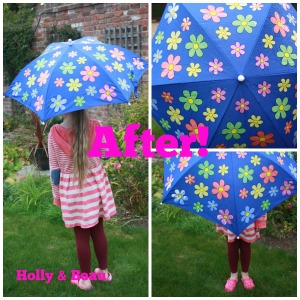