We don’t often do day trips in our family. There’s the kids’ sport which dominates our weekends for starters. The rugby season may be over, but we currently have swimming lessons, football and dance rehearsals on Saturdays. Then there’s all the work we’re still doing on our house and garden, which leaves us very little free time. And as I have always worked until now, there was never much spare time in the school holidays either. But last Bank Holiday Monday we went to Barcelona, so it wouldn’t seem right to let an entire half-term and Bank Holiday pass us by without doing SOMETHING.

So we decided to go to Weston-super-Mare. Weston is the nearest seaside to us and is just over an hour away by car. My husband took the kids when I was at work about three years ago and they all loved it. To make it even better, we decided to go by train. With a family railcard it works out cheaper than petrol and parking.

In my head, I was picturing the beach and donkey rides, but my family had other ideas. They wanted to go to the pier and the rides. I’m not a big fan of amusement arcades and rides, they have the same kind of effect on me as fairs, but I can honestly say I haven’t seen my daughter so happy and excited in months. She literally couldn’t stop smiling. She smiled so much her face could have burst. 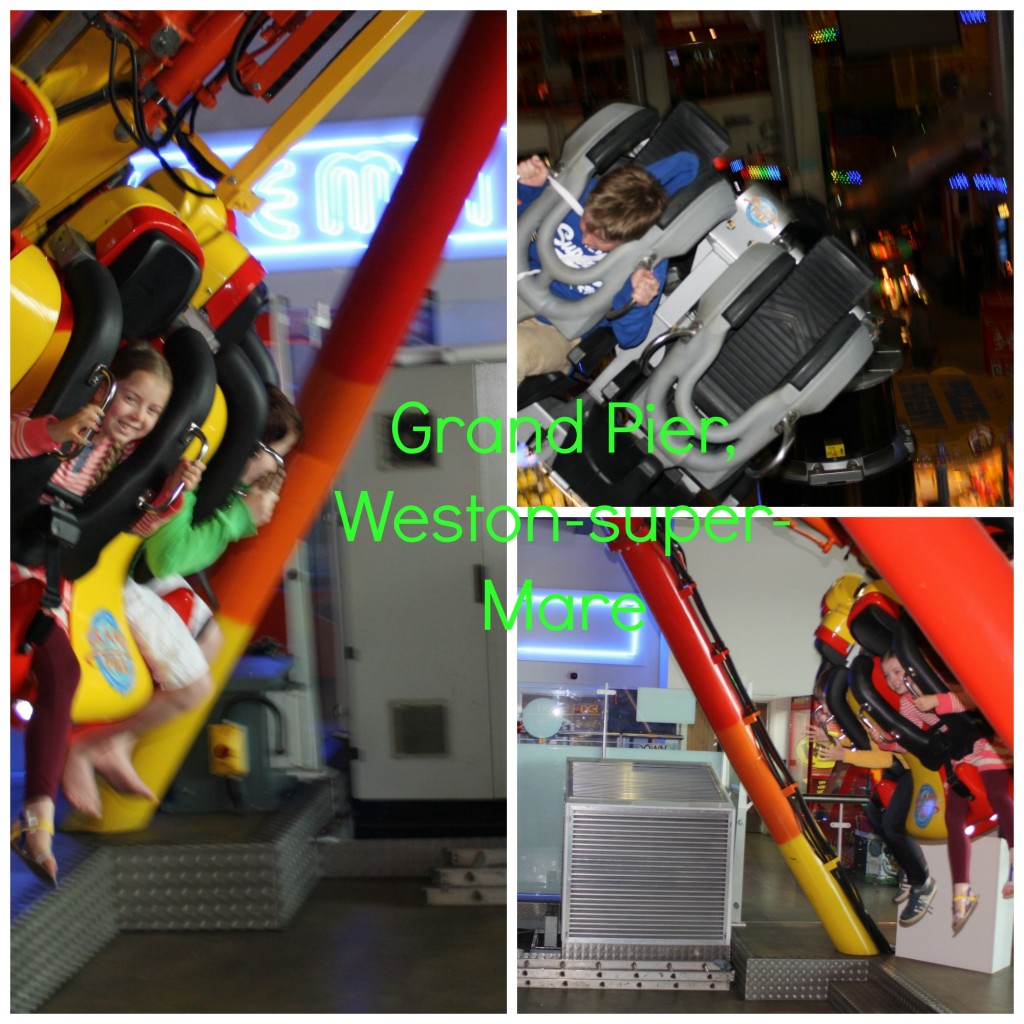 It costs a £1 to even get on to the pier, which seems a bit of a rip-off. Then you can buy a wristband for unlimited rides for £12.50. The rides are of varying prices – from £2 up to £5, but there aren’t that many of them, so we decided to just let the kids have about three rides each and pay for the rides individually. It wasn’t cheap, but it was less than £12.50 each. The younger two went on Sidewinder, a sort of swinging ride, and Free Fall, one of those tall ones that goes up and then falls down quickly. I do slightly worry about my daughter on rides as she gets travel sick, but I think there is nothing in the world that gives her more pleasure than rides. The look on her face is priceless.

My eldest went on a little two-seater ride which goes out high above the amusements and twists and turns in every possible direction. His first upside down ride! He hasn’t stopped going on about it. All my kids dream of going on an upside down ride, but the boys were both nervous in reality and my daughter isn’t tall enough. She wanted to go on the ride with her brother, but she’s about 5cm too short.

My husband asked my daughter if she’d like to go on the ghost train. None of them knew what a ghost train was! How could they not know this? I’m sure when I was their age, a ghost train was the pinnacle of excitement. When trying to decide whether Mummy or Daddy could go on, she asked if she could just go on with her biggest brother. Unbelievable! They claim to hate each other. She was so excited about the prospect of going on with him that she was jumping up and down clutching his hands. Apparently the ride was a bit rubbish, but it was so nice to see them doing something together other than arguing. 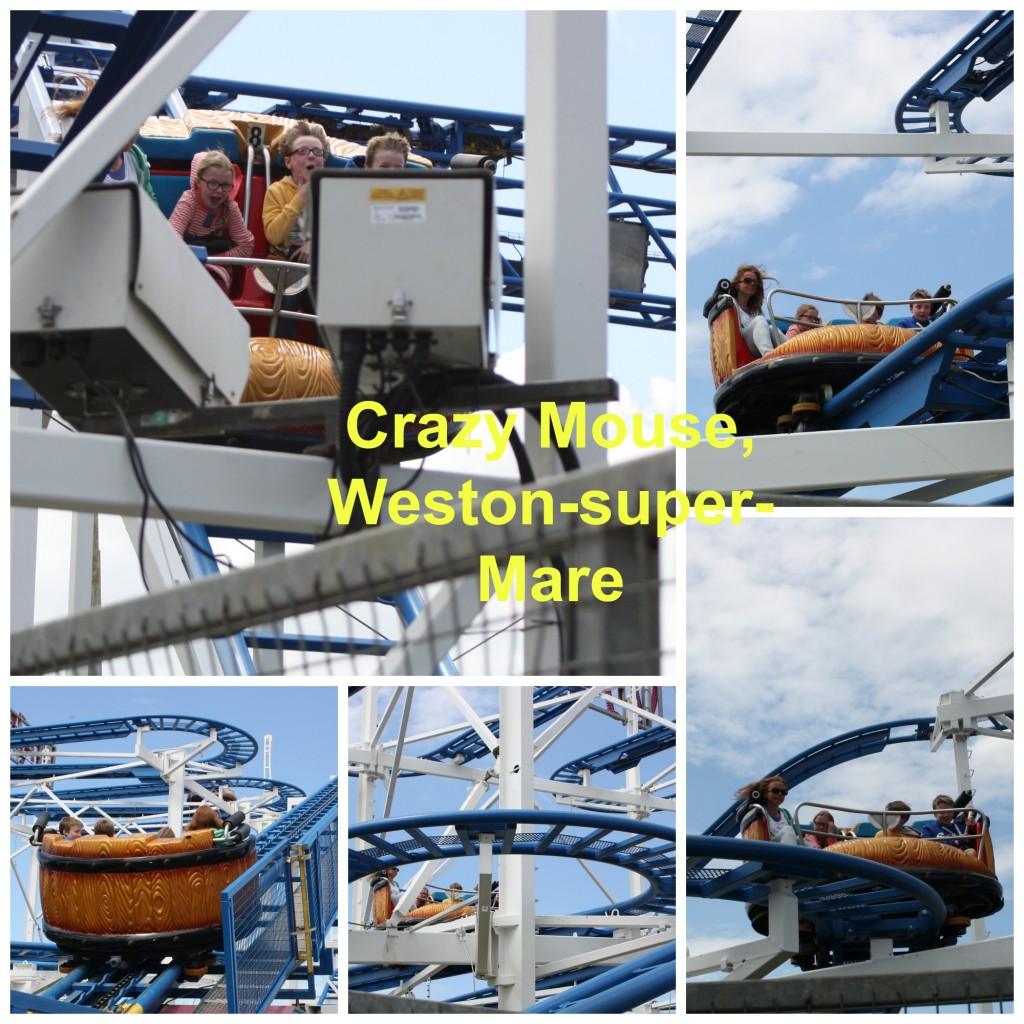 Eventually we left the pier and out onto the very crowded promenade, with chip shop queues already stretching out onto the pavements. We ate some lunch, then went on our final ride of the day – the Crazy Mouse – a little rollercoaster on the seafront. It looked pretty tame. For some reason I allowed myself to be persuaded to go on it. I don’t go on many rollercoasters these days – and now I remember why. The Crazy Mouse really lived up to its name (the crazy part, not the mouse part). It just endlessly threw us around and it just kept spinning. I couldn’t help screaming. I was VERY pleased to get off it. I felt a little bit queasy for about half an hour afterwards. It fascinates me that they don’t seem to make my daughter feel sick, despite the travel sickness.

Then we finally walked on the beach. We didn’t have the right clothing or footwear, not to mention towels and bucket and spades, to actually play on the beach (I suspect this in mainly because my husband couldn’t be bothered to carry anything!), so we just walked. My daughter wanted to dig a channel for water like she does at Padstow, but this is Weston. You can barely see the sea, it’s so far out. 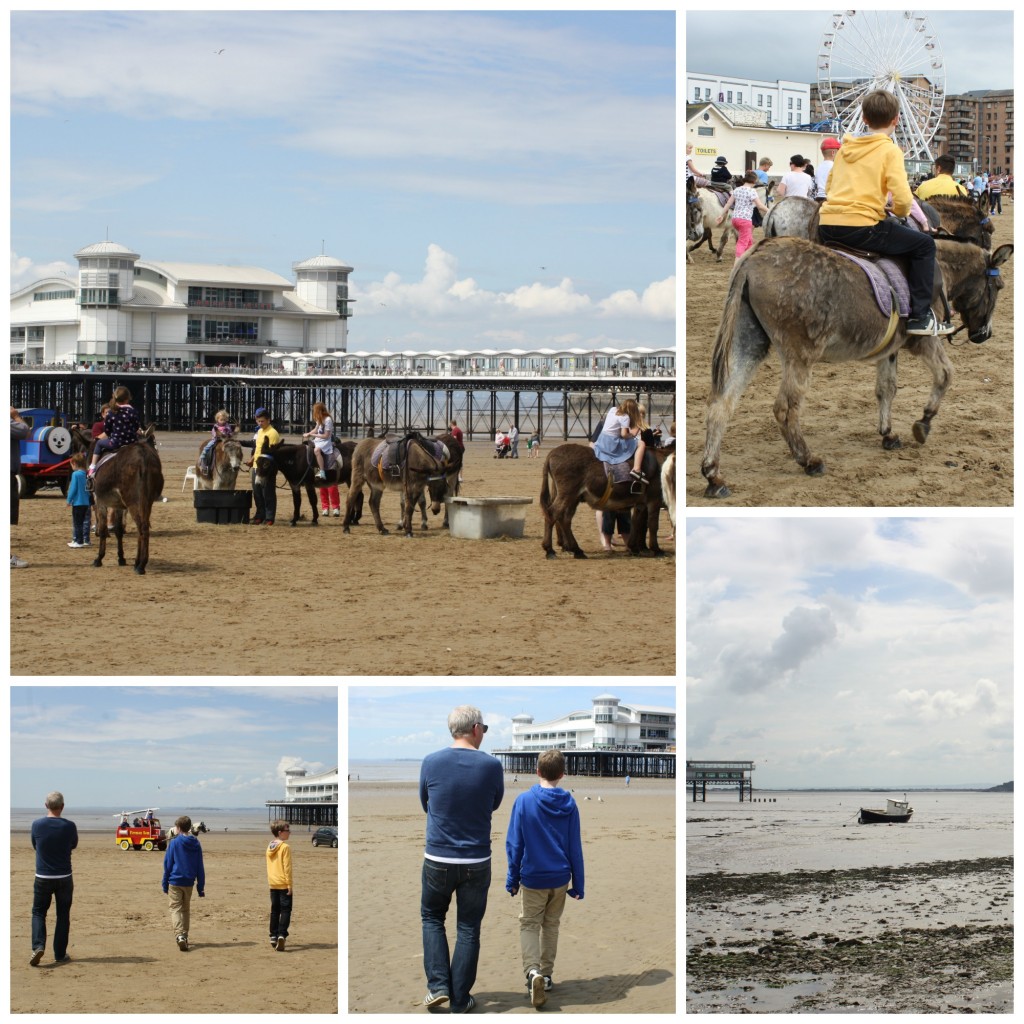 All I really wanted to do at Weston was for the kids to go on a donkey. But my daughter refused. She’s basically frightened. She says: ‘I just really don’t like animals’. That’s donkeys, horses, dogs, cats, cows, sheep… You name it, she doesn’t like it. Of course my eldest was too big, but my younger son had a ride. He was the biggest kid by far, but he absolutely loved it. And so did I! My daughter’s face might have been a picture on the rides, but all I wanted was for my kids to have a traditional English seaside donkey ride.

So we all went home and happy.

(And my son is planning how he can have a pet donkey in the garden.)