Regular readers and people who know me in real life will know that our family spends an awful lot of time in A&E. After yet another visit on Saturday evening, I realised it had all got quite spectacularly out-of-control, so I thought I would record it here for posterity (and maybe in some bizarre way it might stop us needing to go again, here’s hoping).

I cannot begin to remember how many times I have taken a member of my family to A&E since becoming a parent. There is always someone bumping into something or falling off something or being injured by their brother. Both my eldest and my daughter have trapped their fingers in doors, my eldest broke his shoulder when he was 2, my younger son had paper stitches on his cheeks when his brother threw him into the settee and his brother also pushed over a shopping trolley he was strapped into when he was only eight months. And that is just a handful of our highlights. There have been so many more.

But after the low point of my eldest breaking his arm just six weeks after his younger brother knocked his two front teeth out (and shamefully both occupying the same hospital bed and the nurse actually believing they were the same child), things started to slow down. We were down to an average of one visit a year – still too many, but we have an active family, these things happen. And then this current run of incidents started…

I have been with my husband for 21 years. We had been together for 20 and a half years before he a) cut his head and b) needed to go to A&E. It was six months ago that he got elbowed in the forehead at football and it burst open, requiring six stitches. It was a pretty nasty looking injury, and not one I expected to be repeated for at least another 20 years.

Ever since we moved into our house, my husband has been working hard to improve it. Over the last few days, he and my younger son have been shovelling gravel onto the drive. The gravel was delivered on pallets and the pallets needed to be got rid of. But they were too big to fit in the car to take them to the tip. So my husband started smashing them up with a sledge hammer. He smashed two with no problem. He was just smashing up his third before watching the Champions League Final, when one of the kids shouted to say he’d cut his head. I assumed they were joking. How could he have cut his head again?

But sure enough, he had. A piece of wood he’d hit had gone flying up into the air and hit him on the head – and his head was bleeding. He stuck a towel on it, and when I had a look I realised the cut was quite big. And we’d be off to A&E again.

The doctor gave my husband the option of glue (not painful, but you can’t wash your hair) or staples (a bit painful and you have to go the GP to have them removed). So dry shampoo is going to be my husband’s new best friend over the next few days. And a small patch of his grey hair will remain restored to its former ginger glory. 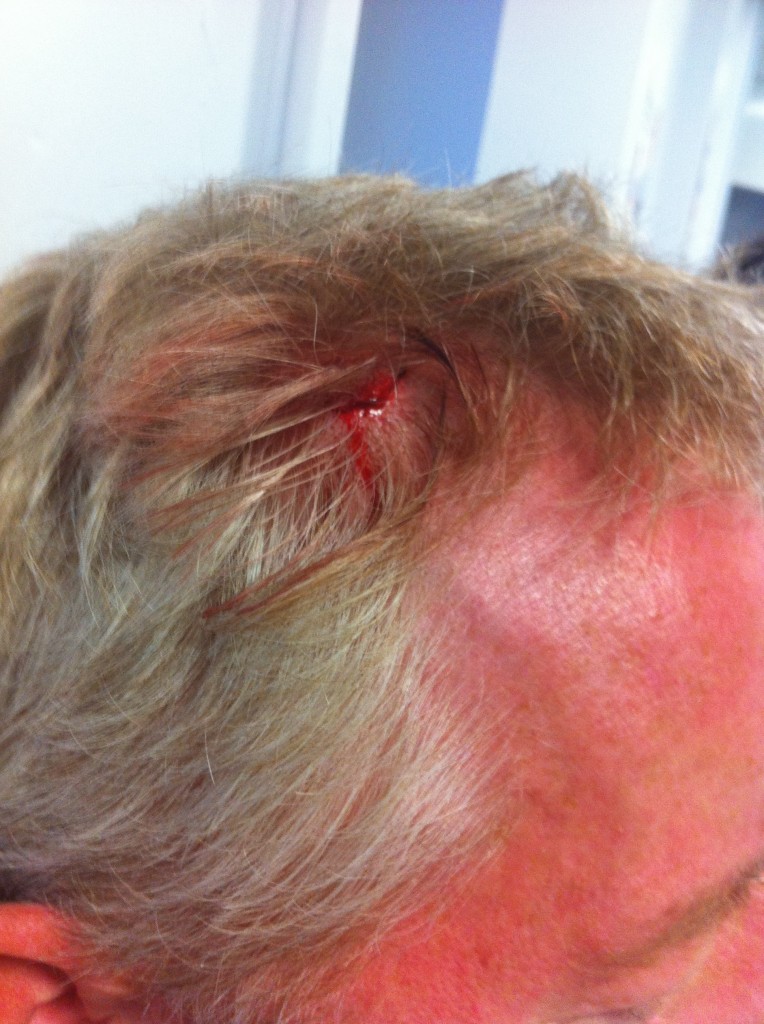