This week’s theme on The Gallery at Sticky Fingers is a weird one. Body parts… What could I write? Maybe I should give it a miss this week? Then I remembered a story I told way back when my blog first started. And it got FOUR WHOLE VIEWS. So it’s probably worth recycling. And big apologies (and even bigger thank yous) if you were one of those four brilliant people that read it.

Breaking a bone is a childhood rite of passage. Most kids will do it at some time. At any one time there will always be two or three kids wandering around school sporting brightly coloured signature-covered plasters on (usually) their arms. A cast is a passport to instant cool and extra friends. It’s easy to forget that kids have to go through a lot of pain to get it.

My eldest, who is generally the least accident-prone of the two boys has broken two bones in his life – remarkably his brother hasn’t broken any.

He broke his arm at the age of 8. I was at work and my mum was holding the fort. My son was playing at his friend’s house. I got a text from my friend telling me that my son had fallen out of a tree and his wrist ‘looked a bit wonky’. After sharing the text with my colleagues and having a giggle about it, I realised this was probably serious and that I ought to go home.

The X-ray confirmed the break. And it was going to need an operation to mend it. Manipulating back under general anaesethic if we were lucky, pinning if we were unlucky. So it was through to the plaster room for a temporary plaster. He was also helpfully given some of that freezing local anaesethic stuff on his hands ready for later. Then we were off to the other hospital to wait for his operation.

We arrived in the same ward his brother had been in six weeks earlier, the next bed along (my younger son had knocked his teeth out). The nurses recognised me. The shame! They thought he was the same child.

It was like time stood still. Another boy had a worse break and a long operation, so it was a long wait. My boy was tired, hungry, in pain and bored. Even when it was time to go in for his operation he had a long wait on his bed outside the anaesethic room. By this time it was past his bedtime and he was in tears – the pain and tiredness, combined with nervousness. A very nice nurse phoned everyone she could to try to get him in as quickly as possible, telling them there was a very distressed 6 year old waiting. So he was 8, whatever.

He’d waited so long for his operation that the freezy-hand stuff had worn off. Cue much distress as they tried to insert the anaesethic into his hand.

Luckily he only needed the arm manipulating, so the operation was relatively short. Afterwards, he was slow to come round and still distressed. He was in such a state he had to be given oxygen (or something similar, I’m no medical expert) to calm him. It was 11.30pm before his dream came true and he was able to eat two slices of toast. Then he dropped off to sleep. Lucky him.

Remember the boy with the worse break? He was in the bed opposite and threw up loudly and spectacularly three times during the night. Then there was a girl with learning disabilities admitted about midnight, who screamed and shouted all night. And there was me, who is incapable of falling asleep anywhere but a bed, trying to sleep on a reclining chair which un-reclined every time I moved anything more than an eyelash. 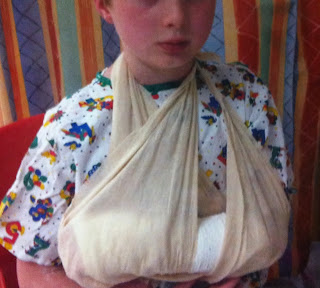 We got the hell out of there first thing the next morning. Ten days later, despite the plaster, my son was climbing a climbing wall, and he was back up a tree as soon as the plaster came off. And I’m pleased to say he hasn’t fallen off since. Touch wood.

I’m linking this up to The Gallery at Sticky Fingers. Pop on over to see how others have interpreted the theme ‘body parts’.