Regular readers will know my younger two kids are little stars. They’re clever, they’re good at sport, they work hard and they achieve. They have the trophies and the glowing school reports to show for it.

But that’s not to say my eldest isn’t special too. He’s above average intelligence, with a good general knowledge and an interest in current affairs and the world around him. He is polite and friendly and adults adore him. He is a son anyone would be very proud and happy to have. He just doesn’t have quite as many trophies as his siblings.

He’s been playing rugby for four seasons now. He’ll never be the best rugby player in the world, but he does well and gets better every season. This season he has also played for the school, which I’m sure has helped his skills and confidence for his team too.

We’ve had our eye on that ‘most improved’ prize ever since under 10s. My son is in under 13s now. Surely it was his time? His rugby has really come on a lot this year. I really, really wanted him to get that trophy (and I’m sure he did too, but he’s now at an age when it’s not cool to mention these things).

The late 30s private school dad doing the announcements said: ‘Under 13s most improved player… ‘ and as he said my son’s first name, my daughter (who can’t stand her brother of course) cheered.

I waited. We’d made that mistake before. His first name is particularly popular among middle class rugby playing boys – with three of them in his team. But one of the others won it last year. It WAS him, wasn’t it?

It was. They said his surname and I cheered and I felt the tears pricking my eyes.

I felt so proud of him. He’d got there in the end. His hard work and progress had been recognised.

My boy – the most improved player. 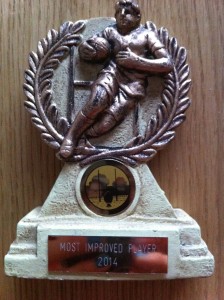