When I saw that this week’s Gallery theme was Easter, I was initially uninspired. I even considered, shock horror, not joining in. But then we had a crazy family Easter and I thought it would be a shame not to record it for posterity. So here goes…

All my daughter wanted for Easter was a Wispa egg. It’s not a lot to ask, so of course the bunny did the right thing. When we got up in the morning, my eldest went straight into the dining room, where our meagre collection of Easter eggs was set out on the table and announced: ‘Bag-sy the Wispa egg’. And it was like my daughter’s world had fallen apart.

She dissolved into tears. For her, Easter was all about the anticipation and excitement. She wanted to walk into the room and see her egg sat there, but her brother got there first and spoilt the surprise for her. None of us could have predicted how upset she would be, but she was in bits.

And there lies the fundamental difference between a nearly-teenager and an 8 year old – one still enjoys the magic and one wants to destroy it.

My mum has always taken Easter quite seriously. In a good way. Easter seems to have become much more of ‘a thing’ in recent years, but it was always a thing for my mum. She always does a big family dinner, second only to Christmas, and lays the table out nicely with Easter decorations (she had those before they became a thing too). She also does an Easter egg hunt in the garden for the kids. It’s totally fair and at every hiding place there are three identical eggs or chocolate rabbits. It used to take a while, but in recent years it’s got down to about two minutes of complete mayhem. The kids usually move too fast for me to even get a photo.

But the pace of life has slowed down again thanks to the arrival of my niece. At 16 months, she had to be part of the Easter egg hunt too this year – and there were four tiny treats in each of the hiding places instead of three. My kids helped her find her eggs and showed her how to put them in her bag (personally decorated, thanks to my mum and Hobbycraft). When the hunt was over, she stayed in the garden and kept looking. Just in case. 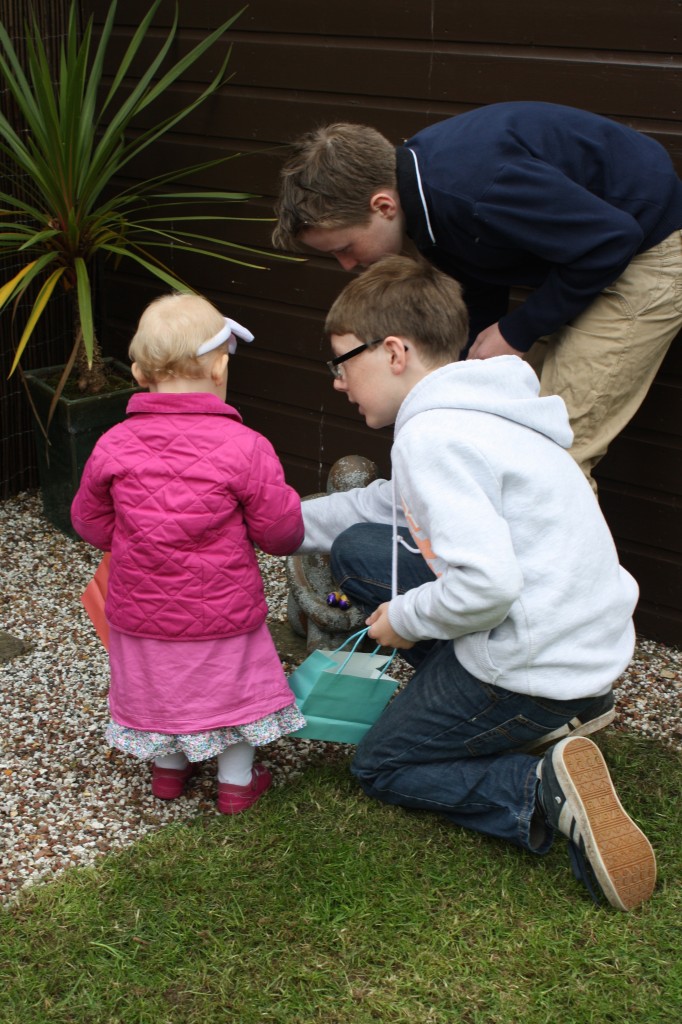 She’s at that lovely age where she is changing almost daily. Even though we see her very often, we can see her getting cleverer and more confident all the time. She makes a good effort of saying all our names, and says ‘hello’ and ‘bye’ to us all. Her shouting ‘bye Ra-ra’ to me repeatedly is the nicest thing I’ve heard for a VERY long time. She was very interested in Grandma’s decorations and reorganising them. As well as dinner for 11 – my parents, us, my sister, brother-in-law, niece and brother – my mum also cooks Easter dinner for my elderly former neighbour, who is about 95. I just have to deliver it. I arrived and she was physically unable to even open the front door. I have a key to her house. But it was in my house. And my key to my own house was at my mum’s house. So I left the dinner on the drive, ran back to my mum’s house and then my own house. Just in time for the care assistant (with a key) arriving. Needless to say, my own dinner was rather cold by the time I got to it.

At lunch time it was my younger son’s turn to get upset. My brother, who is your classic naughty childless uncle, was joking that he was going to teach my niece swear words. Then he claimed that my younger son had once told him ‘the word that is even worse than the f word’. I very much doubt this. My brother’s memory is shocking, so I suspect it didn’t happen, and my son insisted it didn’t. But my brother and my eldest wouldn’t drop the subject and in the end my son left the table in tears.

We had a crazy, loud game of Pictionary, in which even my brother begged the kids to keep their voices down, then my eldest engaged in his traditional activity of trying to beat my brother up. My eldest is now taller than my mum, but is still only 12 and weighs about 7 stone. My brother is 6 foot and 18 stone. He can pump my kids above his head and hang them off his arms. There is NO WAY my son is ever going to beat him up. But I guess as he gets older he puts up a bit more of a fight and my brother resists just that bit more.

All of a sudden my son was coughing and choking (although he did have a bad cough anyway) and he went into the kitchen to get a drink and cough and choke some more. My sister and I followed to see if he was OK, then my husband decided to tell him off for attention-seeking. My son burst into tears and stormed out of the house.

3.30pm and all three of my kids had been properly upset. Brilliant.

I followed him and it took me 10 minutes to track him down. He was wearing a T-shirt and no shoes and it was FREEZING.

The others were going to the park, but I stayed with my son until he’d calmed down and felt ready to face the park and his uncle again.

My brother-in-law is apparently the best person in the world at swing-pushing. My daughter was nearly flying off the seat, which she loved. My younger son and niece were swinging too and the adults were taking it in turn to swing on the fourth swing. My parents were keeping hold of my brother’s huge, strong new dog, who managed to pull my dad over.

The two uncles decided it would be a good idea to throw the rugby ball at my younger son on the swings to see if he could kick it over the fence.  My eldest was shivering, even though he was now wearing a coat, jumper and shoes – a delayed reaction to being without them.

I looked at my crazy family – the adults swinging, the uncles pushing the kids high, the massive dog and the cute niece – and I thought I wouldn’t have them any other way. The tears, the strops, the grandpas being pulled over, the being locked out of your neighbour’s house and the cold dinner. That’s what life is all about.

This post was written in response to a prompt on The Gallery at Sticky Fingers. Pop over to see how others have interpreted the theme ‘Easter’.