A few months back, my husband and his best friend arranged a trip to Snowdon/ male bonding session for themselves and my eldest for early April. My son is a Scout, so it was right up his street. My husband’s friend has been up Snowdon at least a 100 times, so I knew they would be in safe hands. They were all looking forward to it.

Regular readers will know my son has been struggling a bit of late He hasn’t quite settled at school and doesn’t seem to have found his feet with friends. So when I heard his best friend who hadn’t visited for six months was back that weekend, I started working things out. Could his friend go to Snowdon with them?

My son’s friend is the most outdoor child I know. He loves Scouts and survival. He always has a well-packed kit bag and is prepared for every eventuality. He was born to be outside, like a mini Bear Grylls. He would LOVE to go to Snowdon. We had to make this happen! Yes, the trip was partly about father-son bonding, but my son would enjoy it so much more with his friend there. It would probably turn out to be better father-son bonding this way.

The week before the trip, things looked bleak on Snowdon. Snow so thick the train couldn’t run. People being airlifted off the mountain. People have DIED on Snowdon. But my husband trusted his friend to guide them and advise them and I had to do the same. And so they set off… And I didn’t hear from them for a really long time. I must admit I was starting to worry just a little bit. The weather here was so much better, almost spring-like. Surely they would be OK?

And then they rang me. My son was shouting in the background about what an amazing time they were having. They also told me they’d seen blood on the snow ‘where someone died’. The snow was still so thick and deep that they couldn’t make it to the top. The railway and the cafe at the top of the mountain were both still closed.

But the boys didn’t mind. They were having the time of their lives. They’d sledged down the mountain in bivvy bags. (Sounds scary and just the sort of thing I wouldn’t let them do.)

It was really, really hot apparently. But the snow was still thick and beautiful. My husband reckoned it was 15 degrees. To prove how hot it was, my son took his top off and they sent me a photo of him topless with snowy mountains all around him. He has the biggest smile on his face. The other kids burst out laughing when they saw it.

It was a long journey home, but the two boys were so happy. They both said it was the best weekend ever. They’d conquered Snowdon (almost) and they’d spent valuable time together. It was truly a magic moment for both of them. 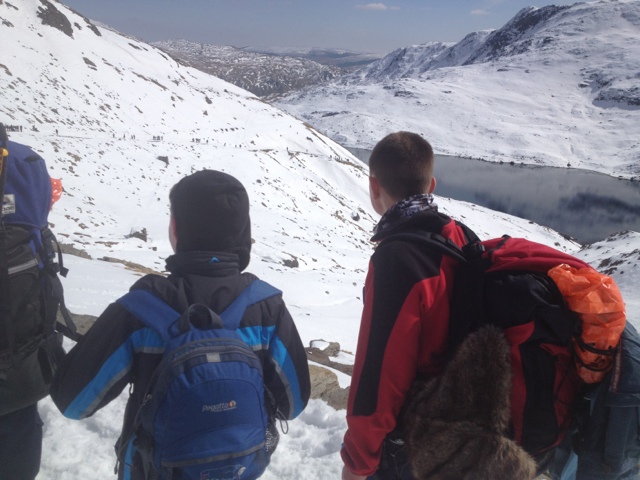