It was last August when we got a very exciting email. My daughter’s ballet teacher had picked her to do a workshop with the Royal Ballet, no less. I was literally bursting with excitement and pride. But I was allowed to tell NO-ONE. My daughter’s teacher had selected three girls (it took a while to even find this information out) and didn’t want the other children to know for fear of upsetting them. So I’ve carried that exciting secret with me for nearly six months.

They made it clear it WASN’T AN AUDITION. But it was a chance to work with the Royal Ballet and see the kind of work they do with children of my daughter’s age who have shown a lot of promise in ballet.

The workshop finally happened the other day, at the Royal Ballet’s studios at the Birmingham Hippodrome. My daughter had her very best bun in her hair and my husband even ironed her tracksuit for her. It was a very special day for us.

Waiting to go in, I saw girls stretching and jumping and pointing their toes and I felt fear. There were going to be some VERY good little ballerinas in there.

The parents watched the whole two-hour session. The session was all about posture and keeping time with the music.

It started off with some very tough abdominal exercises. I could see my daughter was struggling a bit. This was a completely different ball-game to what she was used to.

At all of her dance classes, my daughter shines. She stands out as the best and she radiates star quality.

But she goes to two lovely, inclusive dance schools. There’s no pressure – no competitions, no intensive exam schedule. Just enjoyment. If a child isn’t a natural or makes mistakes, the teacher wouldn’t criticise them. They would be able to carry on making mistakes and being out of time. But enjoying themselves. Maybe they’ll get it eventually, maybe they never will. It’s all fine either way.

Not at the Royal Ballet.

Individual children weren’t criticised, but the group as a whole, while being encouraged, was also damned with faint praise – ‘that wasn’t bad’. When the children were asked how many of them had stayed in time to the music, they were told none of them should have their hands up.

I looked at all of the kids and I realised those girls that were stretching and jumping in the waiting room weren’t so great. And I could see my daughter, who is always good at concentration and keeping time to the music, slowly come back to life.

By the time they got to ‘pony trotting’, the smile, the enthusiasm and the star quality were back.

Out of a class of 28 of the best ballet dancers in the area, my little girl, who has been doing ballet for less than two years, did very well.

It was hard work. It wasn’t exactly fun. But she enjoyed it and she showed me just what she can do.

I can’t describe how proud I was of her. 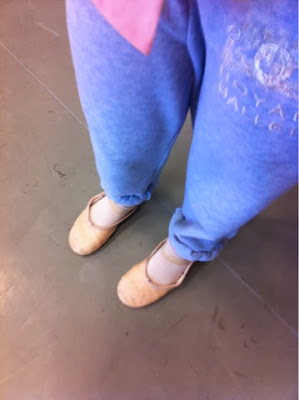