Team Honk relay – I did it!

After nearly two months of training, the day of my leg of the Team Honk relay finally arrived. And I did it! I’m so pleased.

It wasn’t the best of starts. The weather had been shocking with strong winds and torrential rain. I wasn’t sure Joy aka Pink Oddy would even make it out of Tewkesbury to meet me. I admit I was a bit scared of the weather, but I kept telling myself – if Davina can do 500 miles, I can do 10! Davina’s swim, run, cycle has nearly broken her. Mine is just a bit of a challenge. It’s something I know I can do and have done lots of times before. Although I realised it was the first time I’d ever run in a straight line! Whether I’m running a race or training, I always run a loop. When I thought about where I was running from and to it seemed like an awful long way. But 10 miles is 10 miles, whether it’s in a loop or from A to B.

Then my daughter injured her wrist. I spent all the night before wondering whether she needed to go to A&E. Then I looked at her on the morning of my relay and thought ‘she can’t go to school like that’. The wrist had been hanging in the same position since she hurt it and there was no way she was going to write. What kind of mother would I look like sending my daughter to school with an injured wrist because I was off running for charity and didn’t have time to take her to hospital? But what kind of team member would I look like if I had to delay or even cancel my leg of the relay because I took my daughter to hospital? At 6.45am I decided we had to go. At 7.45am we were already on our way home! The wrist had been X-rayed and wasn’t showing any obvious breaks (but children have lots of tiny little bones in their wrists and hands which don’t always show breaks) and was strapped up. And I had time to get her to school and get myself out and running! 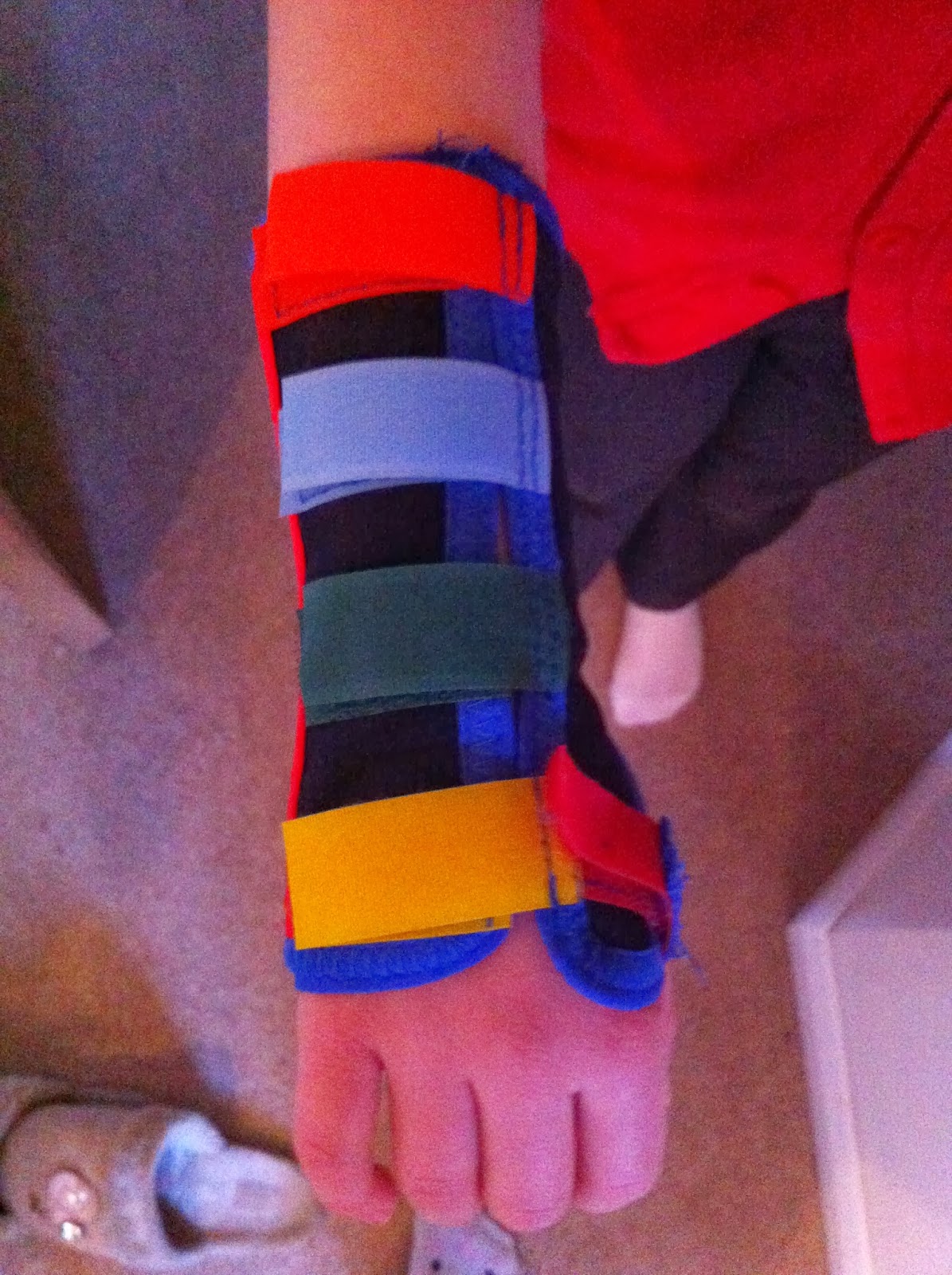 Julie from Julie’s Notebook had done her leg two days earlier. She’d dressed in full (and I mean FULL) Gloucester Rugby kit, along with her lovely dog Freya, and walked from Gloucester to Churchdown – about six miles. I’d met up with her as she set off and we’d posed for photos for the press. 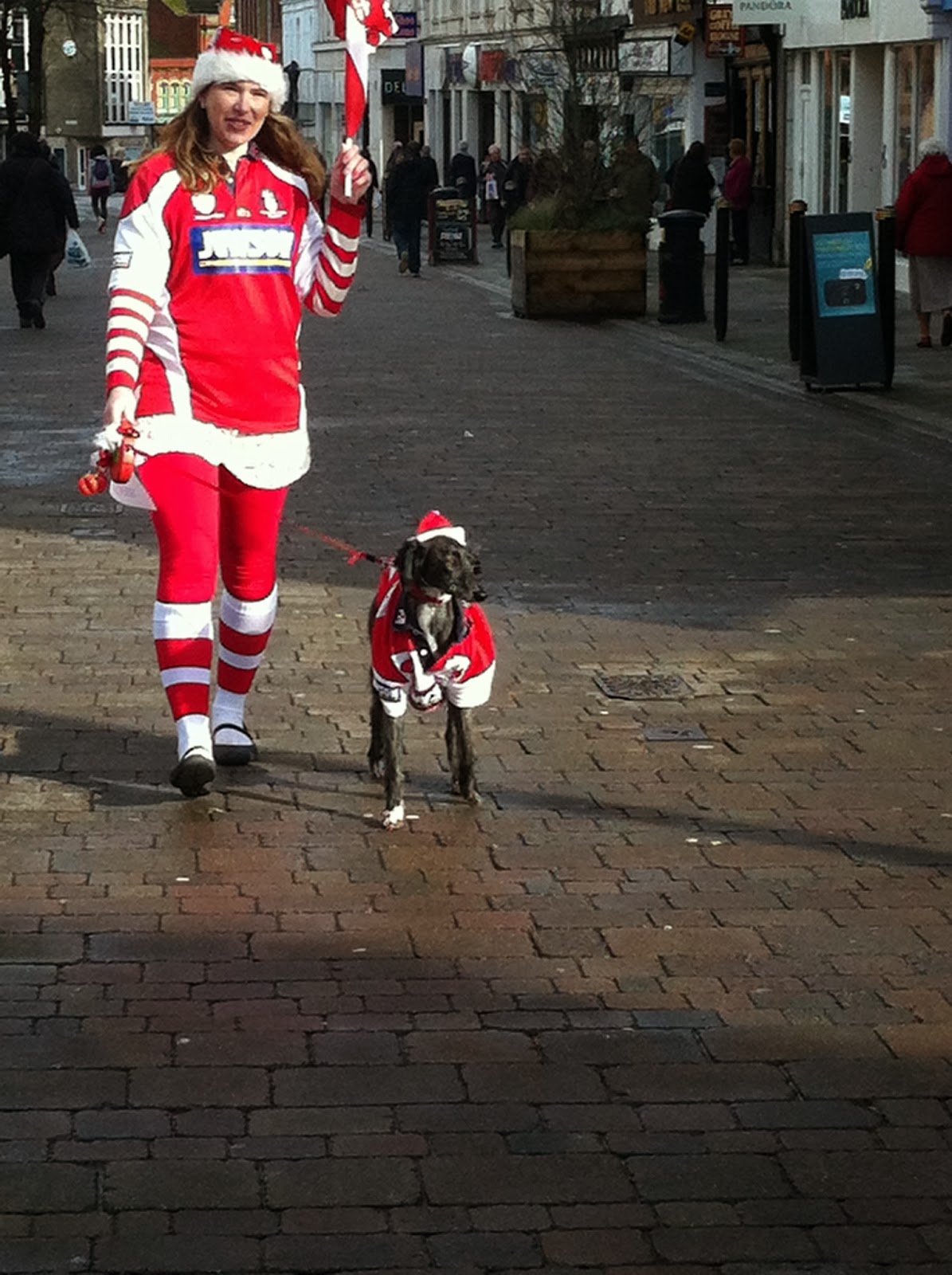 My mum and dad dropped me off in Churchdown and Julie met me there to hand over the baton. And I started running!

Well, sort of. I wasn’t sure which direction to go. With 10 miles to do, the last thing I wanted to do was run the wrong way. I’d noted down key roads on my phone, but missed the crucial turn left or right thing at the start. So I asked an old man. Who clearly thought I was mad, but he helped! 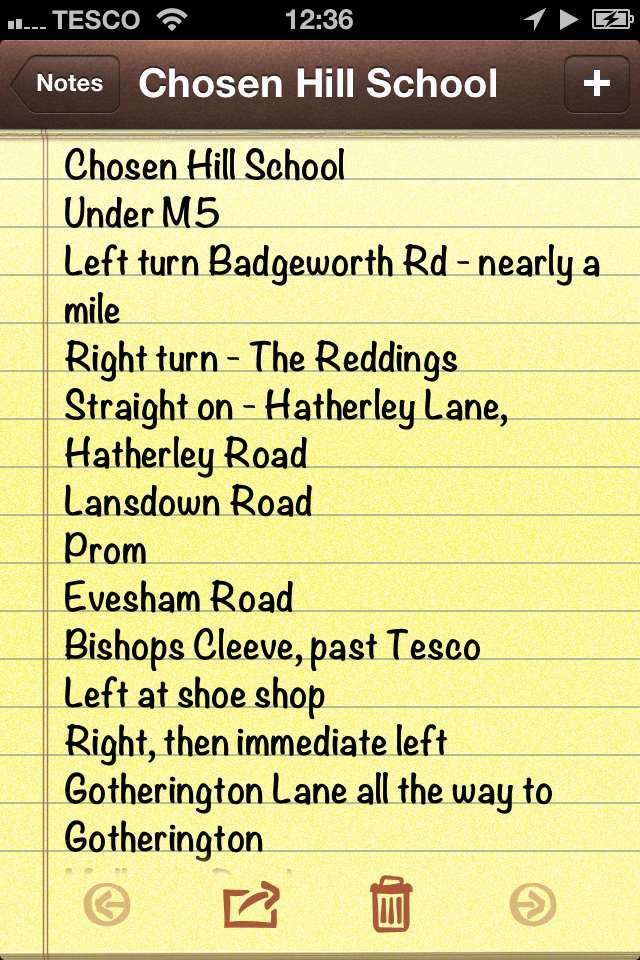 I turned left and off I went! Over the motorway, along muddy verges by a fast road. It wasn’t ideal. After all the wet weather it felt a bit treacherous. But it wasn’t long until I hit civilisation – and footpaths!

Churchdown is a village on the outskirts of Gloucester. It was only about a mile and a half before I hit The Reddings – a suburb on the outskirts of Cheltenham. I’m not familiar with The Reddings or Hatherley – the area I ran through next. But it was quiet and there were paths and I just kept going. It felt like a long way through this area until I hit Cheltenham town centre.

I’d already seen sleet and torrential rain in the morning before I set off, but I soon felt warm and took my coat off – so everyone could see my ‘sponsor me’ sign on the back of my Sport Relief Tshirt. And the baton wasn’t exactly subtle either, so I got a few funny looks! I’d planned to have balloons too, but after the bad weather and my daughter’s wrist and being extra busy at work, there had been no time to shop for balloons. I was just glad to be out there.

It was nearly five miles to Cheltenham town centre. I ran through the centre and out again and up Evesham Road. Evesham Road is a very long, very steep road, which goes up to the famous Cheltenham Racecourse and beyond. I had to have a little walk as I went past the racecourse as it just got too steep, so I attempted to take a selfie. It wasn’t easy getting me AND the baton in! 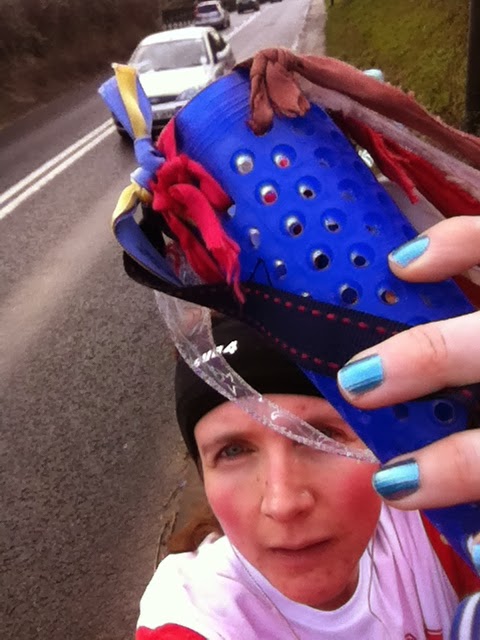 Then it’s downhill and another mile or two into Bishops Cleeve. I ran through Bishops Cleeve and my app told me I’d run over eight miles. I couldn’t believe I was so close to the end! I was really enjoying it and the weather was actually good – the sun was out and the sky was blue.

Then it was out of Bishops Cleeve and, before I knew it, I was in Gotherington – my destination. We’d arranged the meeting place at a farm, which I couldn’t find. I went down the road where I expected to find it and came across my first floodwater (it was very insignificant floodwater, but I guess it had been more significant a few hours earlier). Then I hit a dead end. The road was closed. For flood works, funnily enough. I was so close to my destination and I’d run well over 10 miles. My run was over! 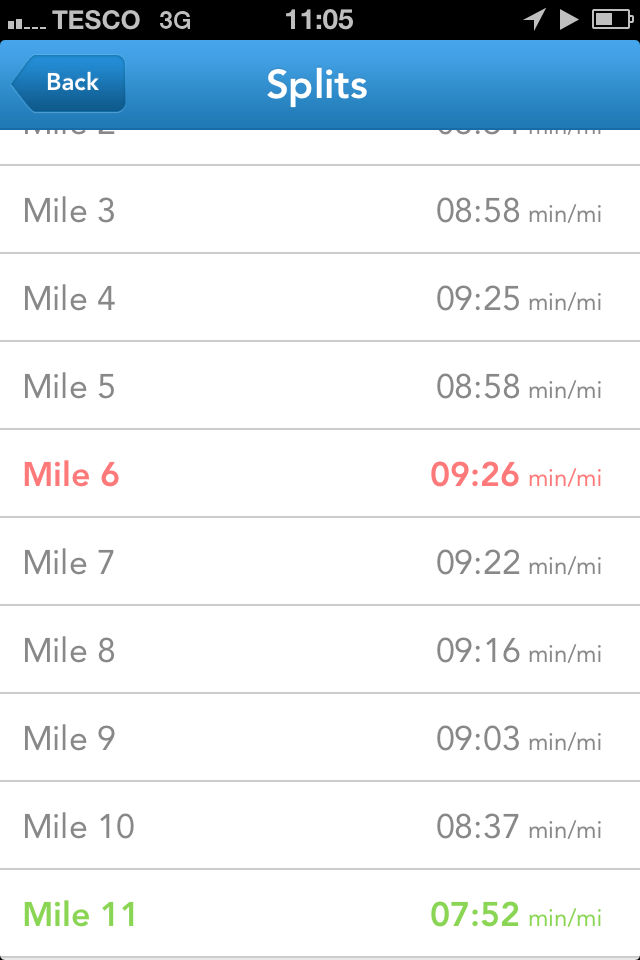 I must say I really enjoyed it. Somehow knowing I was running for a purpose made it much more fun than my usual runs.

I handed over the baton to Joy, who was dressed in the most incredible Mr Blobby costume. She looked fantastic, but couldn’t actually see where she was going! Thank goodness for her support team, in the form of her husband. The local paper came to take our picture and my mum came to pick me up. I ate Green & Blacks all the way home – I had 1,000 calories to replenish! 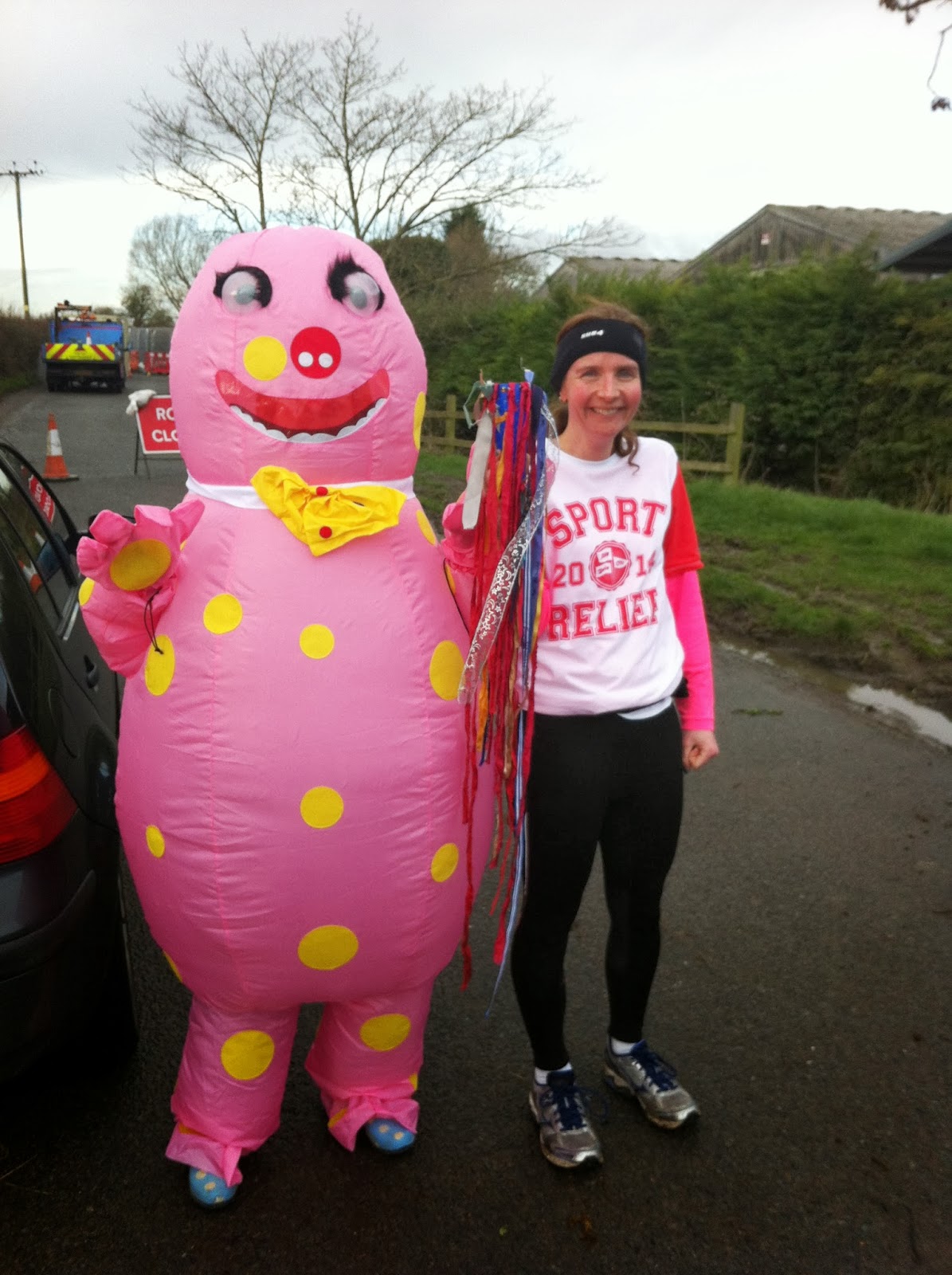 I was so touched and happy to see the many lovely, supportive tweets when I got home. I was already feeling really good about my achievement, but they really gave me even more of a boost.

I couldn’t have done it alone (even though I actually ran alone!), so some thank yous…. I am so grateful to Joy and Julie for their flexibility in letting me run first thing in the morning and not making me have a day off work to do the relay! Also to Julie for making a special journey just to hand the baton to me on the morning. I am so grateful to my brilliant mum for dropping me off and picking me up – I couldn’t have done it without her! Thanks also to Julie’s other half for working out such a fantastic route, there’s no way I could have done it. Big thanks to all the ladies of twitter who tweeted, retweeted and shared the Team Honk relay. You are all awesome!

It’s not too late to sponsor Team Honk Gloucestershire! You can sponsor us RIGHT HERE http://my.sportrelief.com/sponsor/gloucestershireteamhonk It would be much appreciated and every little bit really does help people in the UK and abroad.