My kids are forever surprising me and making me proud. I know they’re clever and talented, but they still keep doing things which stop me in my tracks and make me glow with pride. These last few days have been no exception. I wasn’t even there to witness these little feats, but they gave me full blow-by-blow accounts and I grinned like a maniac at how amazing they are.

In November, years 5 and 6 did some sort of external maths challenge. The kids didn’t know how they’d got on until last week when certificates were given out in assembly. A lot of certificates were given out. My son didn’t have one. He wondered if they’d forgotten him. But then there were three special awards at the end – a bronze, a silver and a gold – for the three very top mathematicians. The bronze went to a year 6. The silver went to a year 6. 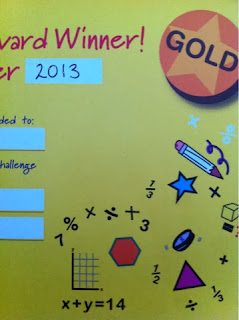 Next up was my daughter. They’ve just started going swimming with the school – her year 3 class and the other year 5 class (ie not my son’s). They sort the classes into ability groups – so there’s not year 3 classes and year 5 classes, there’s just three ability classes. She’s in the top class with mainly year 5s. On the second week, the teachers noticed that there was still a big difference in ability in the top group, so they created a top group plus, including only three year 3s – and one of them is my daughter.

I have the pleasure of watching her swimming lesson on a Saturday morning and she swims so gracefully and elegantly. She glides through the water with barely a ripple. In terms of her technique, she is by far the best swimmer in our family.

Every year the year 5s at school join in with the KNex challenge. KNex is a construction toy and the challenge is an external engineering competition. My son started telling me the story. It had all the hallmarks of a massive long excuse of why he didn’t win (and it’s not as though I actually expected him to win anyway, as he’s never used KNex, although he is a Technic Lego whizz). He told us everyone else had made really pretty good constructions and he and his friend had concentrated on the gears. Surely it was going to go the way of ‘We spent too long on the gears and ran out of time so X and Y won it… ‘. The story went on and on. He was giving nothing away.

But they won it. Then they had to be judged against the winner of the other class to see who would go on to represent the school. They won that too, so now my son, who has never touched KNex in his life before, is going to represent his school in an engineering challenge.

Sometimes I wonder where they came from!