I’ve got to have my wisdom tooth out and, I’ll admit it, I’m a little bit scared. Because I never get ill (apart from my usual annoying afflictions) I genuinely don’t know how I’ll feel or how I’ll cope with the pain or feeling under the weather.

I also feel a bit of a fraud because I know people who have really suffered with their wisdom teeth for a year or more before having them removed and, actually, mine doesn’t even really hurt.

So why am I having it out?

It started with a lump at the back of my mouth. My bottom wisdom teeth have been ‘partially erupted’ (to use dentist terminology) for half of my life. Let’s be honest, they’re not going to grow now. My first thought was that the lump was something to do with my tooth being half-grown and it would clear up. But it didn’t.

So I asked the dentist about it. The dentist poked and prodded, but didn’t know what it was, so referred me to the hospital.

The day after going to the dentist, I couldn’t speak properly. It felt like the right side of my mouth wasn’t really working. It was an effort to get words out and I was lisping. My front teeth felt kind of numb and weird too. I was pretty freaked out by it. It was a relief when I remembered how much the dentist had poked and prodded the lump. It had become inflamed and swollen and that’s why I was struggling to speak.

It got better quickly, but I still find that if I talk a lot my lisp comes back and I start to struggle to get my words out.

When I got to the hospital several weeks later it turned out the lump was exactly what I’d thought – caused by my tooth that hadn’t come through – and not, as the dentist had thought, a wart. I’m so relieved. A wart in my mouth? Yuk.

I had an X-ray and was told the tooth wasn’t going to grow and was sitting on a nerve (hence the numb feeling in my front teeth). A pocket had opened up between my tooth and gum which will become infected. At some point the tooth will start to rot. At some point it will have to come out.

So the doctor (he’s not a dentist if he’s at the hospital, is he?) recommended I have the tooth out sooner rather than later, before it becomes a real problem to me.

So that’s why I’m having my wisdom tooth out.

He gave me the option of :

So I’m going for the sedation option. That way I won’t be putting my life at risk uneccesarily with a general anaesethic, but nor will I be scaring myself by trying to be too brave, knowing that I won’t actually cope with it.
But I’m still scared. I’ve never been sedated before. And I don’t drink alcohol. I’m used to being 100% in control at all times. I don’t know what’s going to happen. I don’t know how I’ll feel or what I’ll do. I don’t know what I’ll remember.
I do know that I’m not allowed to drive, lock a door, be left alone or sign anything important for 24 hours.
Perhaps I also ought to stay away from social media? 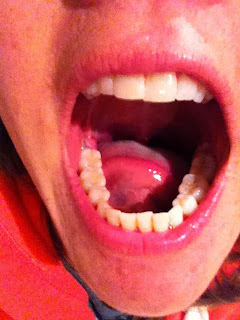 Yes, that is the inside of my actual mouth. Sorry. Partially erupted wisdom tooth and lump just visible on the right at the bottom.