As I stood popping prescription pills in the kitchen (two types – thanks for the line, Eminem, I like it), I thought to myself, am I really as healthy as I think I am?

Because I don’t get ill, but I do have things wrong with me. I have three things permanently wrong with me – and I have probably mentioned them all in passing at one time or another. Between these things, I currently have a whopping FIVE prescriptions from the doctor of things I use every single day. Is that HEALTHY?!

My three long-standing ailments are eczema, acne and IBS.

I’ve had eczema since I was 8 – just on my hands. My hands are permanently rough and scaly. In the summer, it’s just a bit rough. In the winter it’s bright red, cracked, bleeding and throbbing. My hands are so painful I can barely manage to straighten my fingers. They start off not too bad in the morning, after a night of sleep with no washing, no chemicals and no cold wind, but as the day progresses, they get worse and worse.

I can’t bear to wash them and dry them, but I have to. I have to because I’m a mum and constantly switching between cooking and cleaning and the occasional wiping of a snotty nose. And because, although washing and drying hurts them, the alternative is usually worse. The slightest drop of food or drink or the merest hint of a cleaning chemical on them is agony. Washing is the lesser of the two evils.

So to manage this situation, I have two prescriptions – a cream, which I use as soap all the time and moisturiser as often as I need, and a steroid cream, which I can only use at bedtime. It gives me manly hairy hands. Nice. It thins the skin, so it may be a bit of a vicious circle, but life without it would be unbearable.

The acne I’ve had since I was 12. And now I’m 38. I have been on constant medication for it since I was 16. Most of the time this has been lotions, but I took tablets from the age of 16 to 20 and I’m back on them now. With lotion as well.

I have always envied people when they say ‘Oh God, I’ve got a spot!’ Because I’ve never had a spot. Even at its very best, when the medication has been working well, I have never had A spot. I have always had several spots.

Now I may have several hundred spots. Well, maybe 100. Luckily they are mainly under my chin, but I have a fair number on my cheeks, neck and forehead too. I don’t even bother counting the ones on my back because they’re not visible. Since going on the medication they seem to have got worse. I hope this is the antibiotics ‘bringing them out’ ready to cure them. This is not based on any sort of scientific fact, just some vague old wives’ tale of my own that I cling on to.

The only time my spots were worse was when I was put on the wrong medication and it brought me out in hideous boils on my cheeks. Everyone was polite enough not to mention it, apart from my ex-boss, a woman in her 50s, who asked out of genuine concern if I was OK, but it really upset me. The dreadful skin coincided with my crazy diet to eradicate the IBS. I was breastfeeding and living on rice and vegetables. I weighed 8 stone and had great boils on my face. I looked dreadful.

Which brings me to long-standing ailment number 3. I’ve been aware of my IBS since I was 28 but, looking back, I think I’ve had it since I was about 24. At its worst, just before my daughter’s 1st birthday, it was giving my constipation, diarrhoea, stomach ache, back ache (!), making me feel sick and making me incredibly bloated – about 20 weeks pregnant by bedtime.

There isn’t a day goes by when I don’t suffer with it, but I just have to manage it to keep the suffering at a tolerable level. I eat a slightly crazy diet with very little wheat, very little dairy and a huge quantity of fruit and vegetables. I take peppermint tablets on prescription to take the edge off further. Every now and then it all gets too much and I go back to the doctor and I get tested for coeliac and other things (again) and they all come back negative.

So I just have to live with it. And the acne. And the eczema. I’m dead healthy, me. 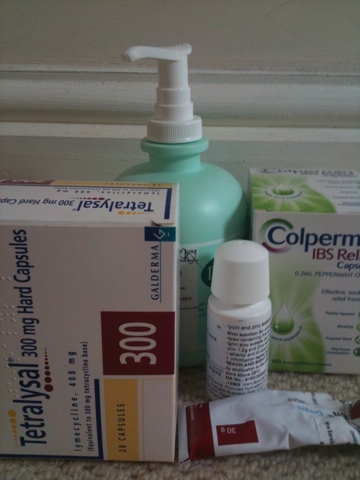