‘But wait a minute!’ I hear you cry, ‘Aren’t bungalows and cul-de-sacs for OLD PEOPLE?’

Well, yes, now you mention it, they are.

My oldest friend grew up in the cul-de-sac. She was the only child living there. Her very presence was frowned upon. Her parents were actually told ‘this isn’t a place for children’. She couldn’t play in the road or make a noise or a mess or (God forbid!) let her ball go onto a neighbour’s drive because it just wasn’t acceptable.

More than 30 years later, things have moved on. Yes, the cul-de-sac is still full of old people. Most of them range from mid-70s up to mid-90s. But the kids aren’t frowned on.

My kids and their friends play in the road and climb the tree. They kick balls around and ride bikes. They run up and down. My neighbours, many of whom aren’t as mobile as they once were, take great pleasure in seeing the kids outside enjoying themselves. They do that old person thing of commenting on how they’ve grown. And who can blame them? They saw me bring my little bundle home from hospital and now she’s in the juniors at school. My boys were toddlers and now they’re nearly as big as me. 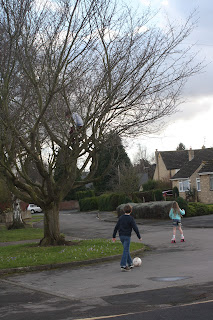 Old people make great neighbours. One couple in particular always look forward to seeing our kids at Halloween They always invite us in for a chat and always have sweets bagged up individually for each of my children. The bags gets bigger and more impressive every year! It is such a pleasure to chat to them and they love hearing our news.

But very soon everything will go back to the way it was ‘meant’ to be 30 or 40 years ago. There will be no more children and no more young(ish) people in the road. The second youngest family has left and we’re hot on their heels. Both houses have been bought by couples in retirement – one in their early 60s and one a few years older. Our neighbour in his early to mid-50s will be the youngest person in the road.

We love our cul-de-sac, but the great thing is, even though we won’t live there any more, we will still be just around the corner. My kids will still kick their ball there and climb the tree there, the neighbours will still see them growing and we’ll still be around at Halloween!