The boys and I read the original Skulduggery Pleasant a couple of years ago. It was funny, dark, exciting and scary.

From there, they kept on reading of their own accord and went on to read the whole series by Derek Landy. The books aren’t easy reads. They are long and complex, with detailed plots. In other words, they’re perfect for confident readers aged about 11 and over.

So you can imagine how pleased my boys were when we were offered our own copy of Last Stand of Dead Men, the eighth book in the series, to review on the day it was published. My eldest decided he was going to read it first.

Please bear in mind that my 12 year old son is a boy of few words. The fact that he hasn’t written much is not a reflection on the book. So, without further ado, I give you my son’s review of Skulduggery Pleasant Last Stand of Dead Men:

Valkyrie Caine has recently turned 18, but as usual in the world of magic, trouble is brewing. The Irish sanctuary is beginning to fall out with the Supreme Council, but Valkyrie needs to watch out. If she keeps focusing on the war that’s about to erupt between these two kingdoms, she needs to look out for her biggest enemy… Herself.

Skulduggery Pleasant Last Stand of Dead Men is a gripping, exciting story, suitable for boys who enjoy books with lots of excitement. However, the huge amount of characters makes it hard to understand in some places. 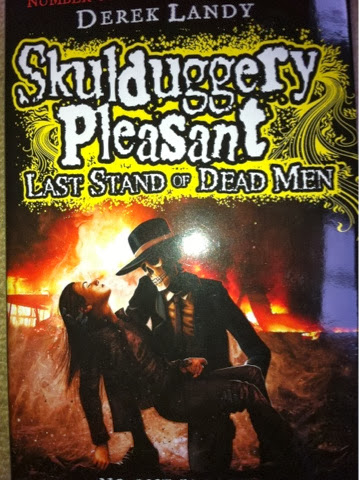