My daughter gets travel sick, but actually she has only been sick twice in her life – both times in Italy. Since then she’s felt sick a handful of times and I’ve learned to look out for the warning signs – it starts with being quiet, then she complains that she’s tired, then says she’s got a headache. This is the point where we need to stop the car, because if it gets to tummy ache, we’re in trouble!

Last year in Padstow we had a trip on the Jubilee Queen – a big passenger boat which goes out to the open sea. You get to see some stunning scenery and hopefully some wildlife too. But I remember I didn’t enjoy it that much – I was worried my daughter would feel seasick (she didn’t), I felt a little queasy myself and, strangely, my claustrophobia makes me anxious – even though I’m out in the open rather than trapped in a tight space – because I still can’t escape. 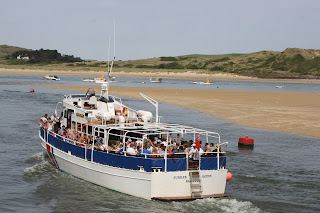 But my husband loved it and was very keen to go on it again this year. We had my son’s best friend staying over, which was great. So I had four kids to feel responsible for. We got on the boat and I didn’t feel right. All my worries came back – I felt trapped and panicky with all the people there, I was worried about my daughter feeling sick and my own stomach felt unsettled because I was feeling anxious. I have a phobia of vomiting, which isn’t great. I sat down and I knew I couldn’t do it. I just wanted to get off the boat. I couldn’t explain it, but I didn’t feel right. My husband said he would be OK with the kids and I got off the boat and waved them off.

I went back to the holiday house to unwind and read my book. Then I went back to meet the boat. My son’s friend and younger son got off first. They told me my husband and daughter had to move as my daughter was feeling sick.

Eventually they got off the boat. My poor girl had been sick. My husband was fuming – he felt they’d been badly treated. The waves were really big as the tide was particularly high and there had been no warning. I’d put my daughter’s sea bands on her wrists to help with any potential seasickness, but they hadn’t helped. She’d felt sick almost straight away, so my husband took her inside, where she felt a bit better. She obviously didn’t look well, so a member of the crew said she had to go outside if she felt sick. They didn’t offer her a bucket. She went outside, hit a couple more waves and was sick. The crew told them they should have asked for a bucket. But they knew she was feeling sick and hadn’t offered her a bucket. Nor had they warned that the very high tide would mean extra high waves and more potential for seasickness. Because they might have missed out on a few customers and valuable extra cash.

Nobody asked if my daughter was OK. She’s only 7. It wasn’t her fault.

My husband said he was ready to give them a piece of his mind for the appalling way they’d been treated. But he went one better. Somehow when they’d moved seats, they’d been missed and hadn’t paid. Under normal circumstances we would follow it up and make sure we paid, but in this case he decided to save the £35 it would have cost for an adult and four kids.

On the plus side, the boys enjoyed the trip. I’m not so sure about the people sat near my daughter – I know I would have been very upset if I’d seen someone being sick. And none of us will be going on the Jubilee Queen again.