My son is obsessed with fishing. He first got interested in it back in year 3 when he met his best friend, who was a serious fisherman at the age of 8. Since then his interest has waned a bit, but over recent months it’s back with a vengeance. He’s been hoarding money for a while and now he’s started spending it. On fishing stuff.

He’s obsessed with fishing and he’s ‘really good at it’. But, here’s the thing. He’s never been fishing. He will tell you he has, but he hasn’t. He’s played in a local brook a couple of times with his friend and my brother took him ‘fishing’ at the beach once three years ago. They caught nothing.

I was wondering what he was going to do with all this fishing stuff, with nowhere locally to fish and no family or friends who fish (his best friend moved away a year ago). I feel like an unsupportive mum, but I just don’t know how he can do this hobby.

We picked up a tanned, happy confident boy from Scout camp today. ‘Have you got your photo? And your rod?’ the leaders called after him.

Rod?! More fishing paraphernalia we don’t know what to do with. And how did he afford that with the £15 he had to spend on camp?

‘I caught the biggest fish!’

I’m glad I was wearing sunglasses because it doesn’t do to be seen crying about your boy catching the biggest fish.

But I was just so proud of him and so happy for him. He may never have fished before, but his love of fishing and his absolute belief in himself meant he proved that he really IS good at fishing! 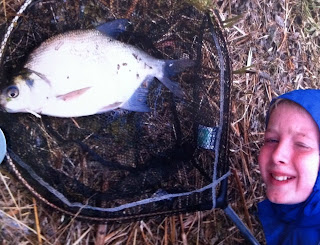