My son is on Scout camp. He’ll be back later today. He’s been gone for a WHOLE WEEK. We’re used to him going away for camps, but he’s never done a whole week before. It feels very strange.

I’m not worried about him missing us or not having an amazing time. He is at his happiest on Scout camp. He’s a resilient boy and loves to be adventurous and try new things. Of course I expected we would miss him – a week is a long time to be without your son. But, most of all, I was worried about his food. 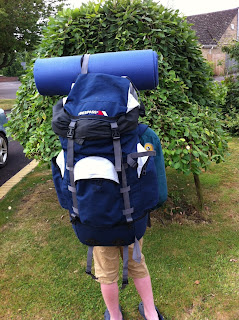 He’s a fussy boy. People always say to me ‘He’ll eat if he’s hungry,’ but he won’t. He’ll eat if you give him pizza, pasta or Weetabix. Not if you give him veggie sausages or, God forbid, vegetables. He went on Cub camp for four days three years ago. That’s a long time for a boy to go away just weeks after his ninth birthday. When he got back, the leader was laughing: ‘He really doesn’t eat, does he?’ He was pretty thin when he got back. Pesto had been his saviour. Someone had bought some for the leader for her birthday (bit of a random present, but hey ho). When my son saw the pesto, he got excited: ‘I love pesto!’ So she made him pesto.

This time he’s expecting to have pesto every night. Plus he’s got chocolate bars and cereal bars packed, with strict instructions that healthy eating messages are to go out the window and he is to eat those if he is hungry and isn’t eating his meals properly. So my fingers are crossed that there’s been plenty of pesto this week.

On the Thursday, two days before he went, my anxieties floated to the top of my brain. They’d been in the back of my mind, but they became much more tangible. He was going away. FOR A WEEK. He wouldn’t eat. We would miss him.

The day before he went, my worry turned to anger. Because I had to pack his stuff and it was really, really hard work. Yeah, I know, he should have done it himself. Be prepared and all that. But would you trust a disorganised 12 year old boy to get everything he needed for a whole week sorted by himself? I rest my case. He DID try to sort his own clothes – which meant him getting out a mixture of age 9 Tshirts and new shorts – all of which were swapped for something more appropriate.

That evening, the anger was replaced by an overwhelming sadness that he was going to be gone for a whole week and I didn’t want him to go.

I was fine watching him go the next morning. I just felt happy for him. I didn’t miss him on the first day – I was enjoying the company of the younger two, who really relax and have fun without him on their case all the time. We went away to the in-laws’ and the in-laws missed him, of course, because they don’t see him very much. But I didn’t miss him.

On Sunday I was still not missing him. I was enjoying a car journey free of arguments and I’m used to him going away for a weekend. This was really early days. But I noticed his absence at bedtime. I kind of missed not shouting at him to go to bed – the thing I hate doing every day.

The other two were so much happier without him – happier in themselves and happier with each other. They talked, they laughed, they played, it was lovely to hear them. With nobody to tell her to shut up, my daughter literally couldn’t stop talking. I have never heard her talk so much in my life.

On Tuesday I woke up and realised it was day 4. That felt like not long until he was home, then I realised he hadn’t even been gone 72 hours. I was starting to feel the hole in my life as a physical ache.

But then I recovered. I started getting used to not having him around. Life is a whole lot easier with two kids rather than three. It feels like more than just taking one out of the equation. There is less arguing, in fact there is NO arguing. There is far less mess and far less nagging. I felt his absence most first thing in the morning and last thing at night – because that’s when I’m usually nagging him and clearing up after him.

We’ve had daily texts from the leader – just the same text to all family, which I’ve really appreciated. It’s nice to know that they’re all happy and having fun.

Sadly, the other two didn’t miss him at all. A year ago, when he went on his year 6 residential his brother really missed him. But since he’s been at secondary school the close bond between my boys has been tested. At the moment they’re just not as close as they once were.

My son will be home in just a few hours and life will be back to normal. There will be a huge load of washing and a very tired boy. It will be good to see him again. I’m hoping he will appreciate being home so much and we will appreciate having him home so much that the arguments might hold off for a few more days.