As I was dancing away to the Levellers a couple of months back, I realised I love them not just because I love the music and the dancing and the atmosphere, I love them because they represent a past life. They represent my time, the 1990s.

I always think people harking back to the 60s or 70s or whenever and living in a time warp are a bit sad. But, listening to The Levellers, I realised we all have our time. And mine was the 90s.

I sat my GCSEs in 1990. From there, the 90s took me through A Levels, my degree in Nottingham, meeting my future husband, getting engaged, getting my first job in London and my current job back home. At the end of the 1990s, I’d bought my first house and tried on my wedding dress.

The 90s were a time of independence, but without responsibility. I wasn’t always happy, a lot of the time I was quite down. But there’s something special about that freedom of early adulthood – about taking your own decisions, going where you want to go and doing what you want to do. 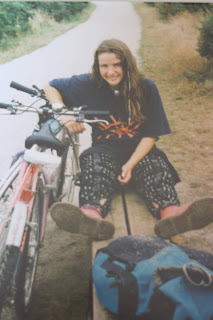 Me in the 90s. In a Levellers Tshirt, of course. And pink Doc Marten’s.

To me, the 90s doesn’t even seem that long ago, but actually it’s 20 years or more. These songs take me right back.

Songs like Carry Me – the very first Levellers song I heard at an indie/ alternative club night on a Monday at the age of 17.

Sell Out which starts with the words ‘The year is 1991… ‘ (from their second album, Levelling the Land in 1991 – still probably their most popular)

The Riverflow which starts with the word ‘I met you in 82… ‘ (also from Levelling the Land, it gives me my clearest memory of seeing them for the first time, at Glastonbury, as an 18 year old in 1992)

Far From Home (from Levelling the Land) which I used to sing with my sister when she was just 9. Who would have believed I would still be educating 9 year olds to love the Levellers in 2013?

Later, I can picture myself sat in the car outside my karate class in Nottingham listening to Hope Street on the radio. The radio! Levellers on the radio?! Whatever next? (This was the first single from Zeitgest in 1995, which actually reached number 1 in the charts. Despite their chart success with this album and some of the singles from it, their first two albums – A Weapon Called the World and Levelling the Land remain the favourites with fans – and tracks from these albums still form the bulk of their live sets.) 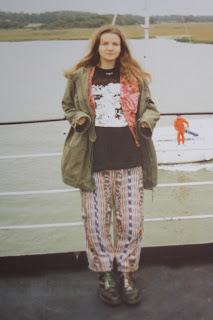 When I listen to and dance to The Levellers, the last 20 years of being a grown up and a mum with responsibilities is forgotten. The Levellers take me back to the carefree days of the 1990s and for that I love them. Thank you, Levellers.

What’s ‘your time’ and what takes you back there?