When my younger son was born, I hoped my boys would grow up with a close bond. I hoped they’d be the sort of brothers who were best friends. Who would go to the pub together as adults and be best man at each other’s weddings. And so far, so good.

There are two years and four months between my boys, and three school years. To look at them or to listen to them talk, you would think there was a year between them. When they were younger they were often mistaken for twins.

My husband had the same age gap with his brother and they shared a room, yet he says they weren’t ever as close as my boys. I’m so happy my boys are such a good friends.

They are chalk and cheese. Yet they are best friends.

My eldest is a daydreamer – full of crazy schemes and strange questions. He is de-motivated and easily distracted. He is a vegetarian, who doesn’t like vegetables. Or much food at all. He isn’t great at sport. He loves Scouts and he enjoys playing his violin. He goes through phases of collecting things – his latest thing is Olympic memorobilia. 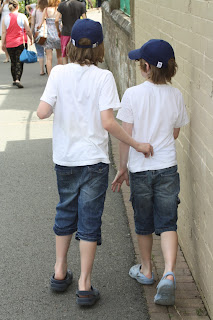 My younger son is a ball of energy and enthusiasm. He is highly motivated, highly intelligent and a natural sportsperson. He is big for his age and is a role model to his peers in so many ways. He has school dinners most days because he’s not a fussy eater. He plays the guitar and loves Lego and Beast Quest. 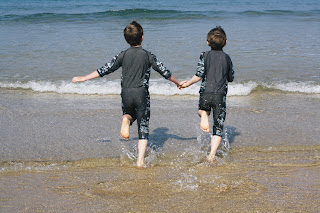 They’ve shared a bedroom since I got pregnant with their sister and their bedroom is their (very untidy) sanctuary. They stay up far too late chatting and giggling. They know far more about each others’ lives than the rest of us will ever know. They have their favourite things (the Olympic stuff, the Lego, the Beast Quest books), but many of the things in that bedroom just belong to the boys. They may have belonged to one or other of them at one time, but nobody remembers which boy, and they don’t mind.

The bond is being tested a bit right now because my eldest is at secondary school. He’s trying to find his way and it isn’t easy. The word ‘cool’ is bandied about too much. He is judging his brother and sister by secondary school standards and they’re not always good enough for him.

But while this annoys my husband, daughter and I, my younger son seems to understand it’s just a phase he’s going through. His brother is just being silly and he will come back to him soon.

Then one of them will make a joke (which the rest of us will find unfunny or just plain irritating) and they will laugh and they will be best of friends again. The bond may be stretched, but it won’t break. They love each other far too much.

I wrote this post in response to a prompt on The Gallery over at Sticky Fingers. Pop over to see how other people have interpreted the theme ‘bond’.