I’ve been asked by the awesome Trouble Doubled to consider what I would put in Room 101. I used to live in Room 101. Seriously. We lived in a studio flat in Nottingham that was number 101, so it really was Room 101. My bed was right by the front door. Anyway, I digress. What would I put in Room 101? Where to begin? There is so much…

The hair donut has caused possibly my biggest Twitter debate ever. Opinion on them is pretty divided, but I think slightly more people agree with me that they are chavvy. If you don’t know what I’m talking about, it’s this soft, round thing (looks like a donut, of course) that you put in your hair to help you create a bun. It gives the illusion you have more hair. And I hate them with a passion.

Part of the reason I hate them is that my daughter is endlessly fascinated by them. She is slightly obsessed with hairstyles and I’ve said she’s not allowed one of these. Because they’re chavvy. Which makes them the forbidden fruit and she wants one even more. Her hair comes down to her bum. She has no need to make it appear she has more hair. But will she listen to me?! She’s told me she’s going to buy one herself when she’s 17. If she waits until she’s 17, I will be very pleased.

Why? Just why? You have dustbins and recycling boxes at home. And if you have too much stuff to put in them, you can drive to a tip household recycling centre and dispose of them properly. Like a human being. If you’re driving anyway, why drive to a little stream and tip your crap in there? WHEN YOU CAN JUST FLIPPING WELL DRIVE TO THE TIP HOUSEHOLD RECYCLING CENTRE. 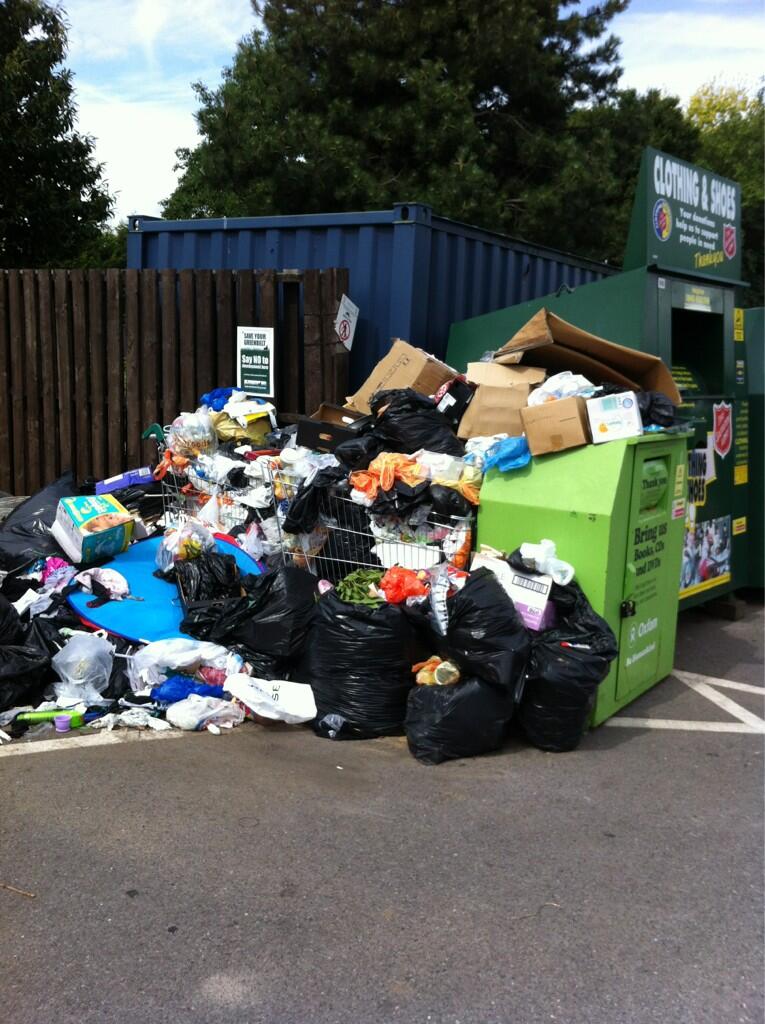 And what about the people who pile their crap up against the recycling bins in supermarket car parks? Does that somehow make you better than the stream tippers? Does that mean you’re recycling? NO IT DOESN’T. You are fly tipping. Just the same as the people who dump their crap in streams. Who do you think moves the heaps of sh*t you have leaned against the bottle banks? Human beings. People who are paid not a lot to either work in the supermarket or for the council disposing of waste WHICH HAS BEEN PROPERLY THROWN AWAY/ RECYCLED. None of them are paid to remove your piles of rotting junk from the supermarket car park.

If the bins are full, take it home with you and bring it back another time. Or take it to the tip household recycling centre. Which in the case of our local supermarket (where this photo was taken), is less than a mile away. Funnily enough, if people had to spend less time shifting your crap from the supermarket car park, they might be able to empty the recycling banks a bit more often.

I make no apologies for this one, even though Trouble Doubled has mentioned it too. I’m not copying, miss, honest!

What is the point in ironing?

People are forever on about their enormous ironing piles. Seriously, people, just shake the stuff out and hang it up. You don’t need to iron it! Free yourself up some time to do something more fun!

Jeans don’t need ironing, do they? Or Tshirts. Or hoodies. All school uniform these days is magical non-iron (and if yours isn’t, I would recommend you look for the stuff that is).

And I think we all look OK. The only thing that regularly gets ironed in this house is my husband’s work shirts. By my husband.

Not My Year Off