‘Look after them’ (Gromit Unleashed)

Last week I had a rare full week off work with the kids. I enjoy my time off with the kids, but we don’t usually DO much. We take life a bit more slowly. We go for walks, we go to the park (although not like we used to), we go to the cinema and they have to come shopping with me and fit round all of the housework and errands.

But with a full week off work, I decided I needed to make the most of it. I needed to be adventurous. I needed to go somewhere. So I decided to go to Bristol to see Gromit Unleashed. I realise this is not a big deal. I know many mums take their kids to theme parks on their own, even take them on holiday on their own. But not me. I’m just not that confident. I’m not the best driver, and I’m even worse at parking, so I didn’t fancy driving. I decided to take the train. Even though I can get nervous on public transport too.

When I announced my intention to embark on this adventure to my husband, he just said ‘look after them’. What else am I going to do?! I’m their main carer. I spend my life looking after them. But I realise this is what I say to him too. My husband has taken them to London before, he’s taken them to Weston-super-Mare and he’s often taken them to watch Man Utd. And he always brings them back in one piece. For him, the driving is his strong point. My worries are mainly that he gives them enough to drink and makes sure they wash their hands before they eat. But he’s good with suncream, because he burns himself, and will always make sure they’ve had plenty to eat (although it may not be the type of food I would want them to eat). I’m good at all this stuff. It’s just the travelling element I’m not so great with. But I was determined!

The first minor problem arose when we got on the train. It was crowded. The boys found a seat together, but my daughter and I had to sit separately, next to strangers, which she was a little bit stressed about. Then we got off the train and it was time for Gromit hunting! 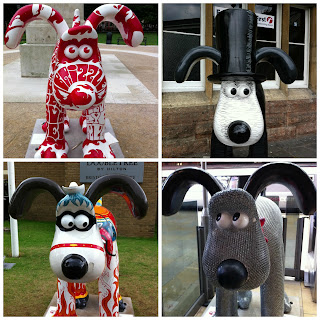 The first one was very easy to find – he was right on the platform – May Contain Nuts (& Bolts). Just outside the station we found Isambark Kingdog Brunel – named after one of Bristol’s most famous sons, of course.

From there it got slightly more challenging, but I had the excellent Gromit app on my phone and an awesome navigator in the form of my younger son. The kids were supposed to take it in turns, but he was the only one who seemed to understand what he was doing (and I’m including myself in this).

The first three after the station involved walk of 400 or 500 metres at a time, but they were nice and quiet and we could take photos in peace. Apart from shouting at each other. At this point I was having not too pleasant flashbacks to our Center Parcs geocaching experience My eldest wanted photos of himself on his own phone with each of the Gromits. My daughter didn’t understand why she couldn’t go in at least some of these photos (and, to be honest, neither did I), so she started shouting at him. Then she shouted that she couldn’t go in any photos of her own and she couldn’t take any photos either. Sigh. 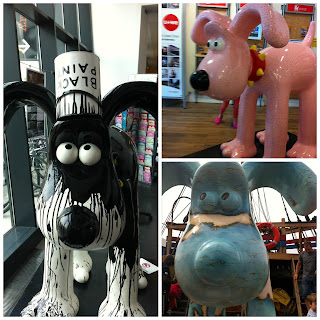 Watch Out, Gromit! A Close Shave and Newfoundland

So she started taking photos on her DS – very slowly. And shouting ‘It’s gone blurry!’. At every Gromit we came to, my son had his photo on his phone, then I took a photo of all the kids on my camera – and on my phone too for Instagram if it was quiet. Then finally my daughter would get the DS out and try to take a photo from the front and the side. Usually while someone else’s little darling was already having their pic taken. Much to her disappointment.

We made it into the city centre and the Gromits were coming thick and fast and the crowds were getting bigger. Everywhere there were people with paper maps and waiting patiently at every Gromit for their photo. Luckily by this point we’d mainly stopped shouting at each other (apart from the DS blurry shouting, but that wasn’t actually aimed at anyone).

We got a bit thrown when the Gromits were inside – and a fair few are. They’re in the library (The Gromalo by Axel Scheffler), M Shed (two in there), tourist information and the Marriott Hotel. The one the kids wanted to see most of all was the one by Jeremy Wade, who presents River Monsters – a programme about large and scary fish that they watch obsessively. Needless to sa,y this one was in the aquarium. There was a Gromit on a boat – The Matthew – and my younger son told me all about the discovery of Newfoundland by the owner/ captain (I’m not sure which) of The Matthew. How does he know all this stuff?! That Gromit is called Newfoundland. Yes, they all have individual names and characters. There was one by Harry Hill (A Close Shave) which the kids were also very star-struck by. 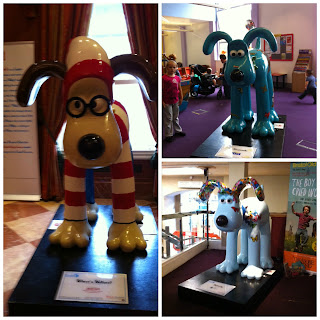 Where’s Wallace? The Gromalo and Butterfly

In the four hours between getting off the train and getting back on, we found 25 Gromits. Pretty good going, I think! We walked and walked and we all really enjoyed it. It was A Grand Day Out. See what I did there?