My younger son and my husband (the coach) are about to start training for the 2013/14 football season. The team is moving into the under 10s age group and its second year of league football.

I love that my son plays football (and that both sons play rugby), there are so many positives about youth sport. He’s learning new skills and building on them with every training session, every game and every kick-about in the garden. There’s real benefits for health and fitness in this couch potato age where far too many kids are glued to the screen from morning until night. There’s working as a team and making new friends. There’s discipline – nobody’s team is going to win if half the kids (or even one of the kids) are too busy messing around with their friends to focus on the game.

Sadly though, even at youth level, this respect can sometimes be lacking. There’s nothing worse than hearing the coach call a kid names or a child’s own parents swearing at them. In the heat of a game, emotions can run high and people sometimes forget about respect.

The latest FA Respect campaign serves as an amusing reminder to everyone involved in football to take a look at their own behaviour and treat each other with a bit more respect.

You can watch the video here http://www.youtube.com/watch?v=SzKD8o0-NZw 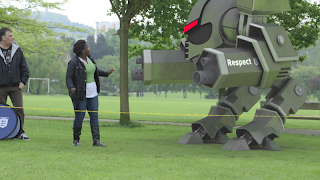 For more information on the FA’s Respect Programme visit www.thefa.com/respect

I was asked to write this post by the FA Respect Programme. I have received no payment for this post and all opinions are my own.