A rainy day in Padstow

When I think of Padstow, the standard weather in the summer is around 17 to 20 degrees with thick cloud. The sun might come out briefly and it’ll feel slightly humid. There will probably be a shower or three, when the temperature drops to about 14 degrees, or even as low as 12.

Our second day in Padstow wasn’t like this. It was PROPERLY rainy. Now I’m one of those no wrong weather, only wrong clothes kind of people. But actually our clothes were more wrong than usual. After a hot summer, I’d forgotten what Padstow weather was really like. I’d packed no waterproof trousers, less hoodies than usual and I’d only got two pairs of jeans myself. It was one of those days when even I struggled to make it outside.

In Padstow all the kids are obsessed with crabbing. Now I don’t get it myself. Stand in cold water, in relatively cold weather for hours, dangling a piece of string with some smelly old fish on the end. Of course, my boys wanted to do crabbing. And my eldest had his new found love of fishing which we all had to contend with and accommodate. 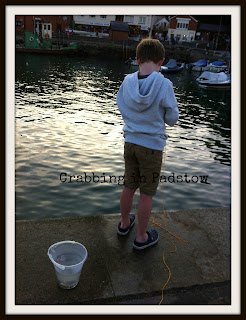 So on this horrible wet day, my boys went crabbing and my daughter and I took a lovely walk to Tesco to get some shopping. Tesco is about 15 minutes from The Sailmakers aka Best Holiday House in the World and it’s uphill all the way. Torrential doesn’t really do the rain justice. It was flowing down the road in rivers and we were almost instantly soaked to the skin, despite wearing waterproof coats. I was wearing jeans, which stuck to my legs horribly and my poor girl was wearing shorts, so her legs were cold, wet and itchy. 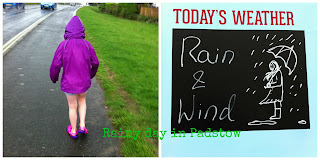 I talked to her cheerfully the whole time as she said things like it was the ‘wettest I’ve ever been’ and she was ‘soaked to the bones’. It was safe to say she hated that walk. The only time she perked up was when she was faced with the choice of Haribo or Cadbury’s Fudge in Tesco to keep her spirits up.

We got back to the holiday house, had a warm bath and got changed.

Before long, the kids were going stir crazy – even more noisy and argumentative than at home. At home they have their favourite TV programmes they’ve recorded, computer games and a much bigger selection of books. They can stay out of mischief for a while. But in the holiday house all the seemed to do was vault the furniture repeatedly, shout loudly and irritate each other.

It was still raining, but we had to go out. The boys went back to crabbing with Daddy and I went a bike ride on the Camel Trail with my daughter. We’d taken the kids’ bikes away with us, as well as my husband’s foldable Brompton commuter/ geek bike, which I LOVE, so I borrowed that.

My daughter wanted to ride all the way to Wadebridge, but I said some rocks about halfway would be fine. The rain was so heavy, we could barely see. When we got to the big metal bridge over the Camel estuary just outside Padstow it sounded like an aeroplane was landing. But it was just the wind. We were soaked to the skin AGAIN. 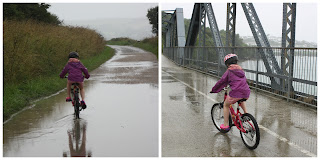 But my daughter kept on cycling. Through the puddles, over the scary bridge, with the wind and rain driving in her face. When we were nearly at the rocks, she decided she’d had enough and wanted to turn round. But I was impressed she’d lasted that long.

‘It was even worse than when we were walking’

‘But you didn’t moan as much’

‘Because I liked it better’

That’s my girl. The weather was appalling, but being outside in the rain is still better than being inside.