I LOVE Harry Potter. I read Harry Potter & the Philosopher’s Stone back in 2001, soon after I’d had my eldest. I was hooked from the very first page. I devoured the next three books and then I waited.

While I waited for the next book to be published, the very first Harry Potter film was released. And I was there on opening night because I loved Harry Potter so much. That film didn’t disappoint. I bought each subsequent book on the day of release and read them avidly. And I watched the films avidly too.

When my boys were 9 and 7, I introduced them to Harry Potter. Like me, they were hooked from that very first page. Then they were racing ahead of me, reading the books at their own pace. They started watching the films and loved them, watching repeatedly on DVD.

When I realised you could go and see it all for real at Warner Bros Studio Tour, I was very excited. But somehow I never got round to going. Until this weekend.

When Warner Bros offered my family the chance to visit, we were so excited. We considered going by train – you get the train to Watford Junction station and there are special Harry Potter buses (not Knight buses, sadly) to transport you to the studios. 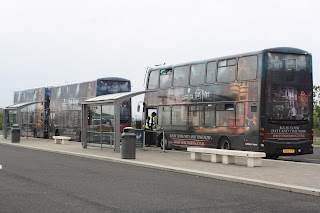 But in the end we opted for the good old car. You can’t just rock up to the studios and go in – you need to book a time slot in advance. We’d booked a 12.30 slot and arrived way too early!

The studio looks impressive from the outside with big scenes from the films. There are also genuine wizard chess pieces from the first film you can pose for pictures with. Inside there are beautiful photos of the cast members and the Ford Anglia flying car dangling from the ceiling. 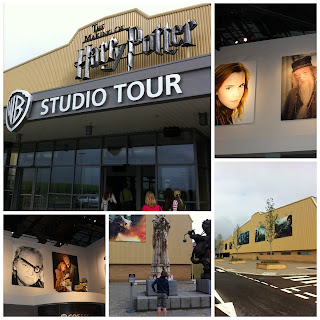 As we were so early, we decided to check out the gift shop while it was quiet. It really is the most stunning shop. Yes, the merchandise is expensive, but it’s really good quality. The kids were very lucky that the studios gave them a wand (worth £24.95) each. And as we’ve only got one girl there were no arguments about who got which one. Result! Being given the wands didn’t stop the kids from snapping up more souvenirs in the gift shop. 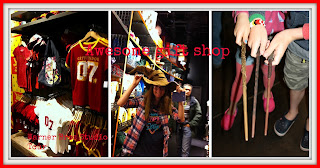 You can hire a digital guide to listen to and watch, giving you more facts and videos as you go along. These cost £4.95. My husband and eldest chose to hire one each and found them really interesting. As they come in different languages they would be great for non-English speakers.

As you wait in the queue for the tour to begin, you get a glimpse into Harry’s cupboard under the stairs at 4 Privet Drive aka the Dursleys’ home. Then it’s into a room for a short film about the Harry Potter phenomenon and another room and another film. This one is presented by Daniel Radcliffe (Harry), Rupert Grint (Ron) and Emma Watson (Hermione) and they talk about their 10 years at the studios working on the films.

And then you enter Hogwarts! It’s straight through the big doors and into the Graat Hall. It’s truly breathtaking and exactly as you see it on film. There is so much to look at – the carvings on the wall, the table settings, the teachers’ costumes all standing at the teachers’ table at the front of the Great Hall… It’s as though you are a first year (Gryffindor, of course) and Dumbledore is about to address you for the first time. 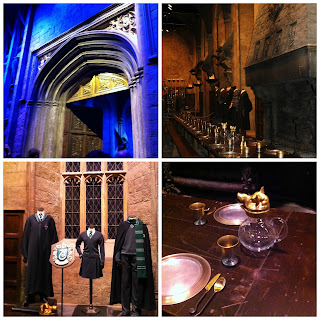 You get a few minutes to take in the hall before being ushered out, so the next group get to walk into an empty hall. From this point you’re on your own – free to explore at your own pace. It never feels crowded and there is so much to take in and enjoy.

We found ourselves in a vast area, with pretty much everything we could possibly want to see, all there – very real and very familiar. There was the Gryffindor common room and the boys’ dormitory – complete with initialled suitcases under the beds and Muggle-born Dean Thomas’ West Ham souvenirs. 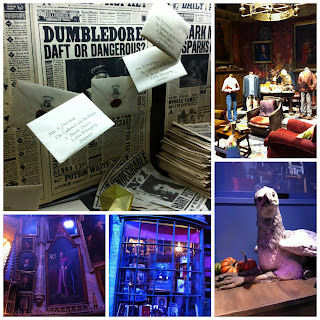 You can go inside Dumbledore’s office, which is truly stunning. The walls are lined with 48 portraits of sleeping former head masters of Hogwarts – who of course wake up and move around during the films. The memory cabinet contains 800 individual labelled glass containers. The attention to detail in everything is just incredible. It’s all too easy to assume everything is computer generated in films these days, but so much of what you see I the Harry Potter films was painstakingly and lovingly created.

The potions classroom was huge and filled with hundreds of gruesome ingredient bottles. Hagrid’s hut was surprisingly small. We learned about the clever tricks they used to make Robbie Coltrane (Hagrid) appear to be a giant.

Over the summer, they held Summer Spells at the studio – a chance to try out some cool wand moves with help from the experts. My kids were very happy to try out their new wands (although you could borrow them if you didn’t have your own).

We had great fun riding brooms in front of a green screen. They kit you out in a robe and your family gets to watch you (and laugh at you) on a screen – flying over London, over water and eventually arriving at Hogwarts. The queues for this moved remarkably quickly. You can buy your photos and/ or your flying DVD, but we decided not to – it was good enough just to have tried it!

By this point you may be feeling thirsty! Once you go outside (into the ‘backlot’) you can buy drinks and snacks (you’re not allowed to eat and drink on the way round, unsurprisingly -imagine spilling Coke on Harry’s robes – it doesn’t bear thinking about!). The snacks and drinks are better value, better qualityh and healthier than your usual theme park rubbish. You’re also allowed to eat and drink your own stuff here. This is also where you can try the famous Butterbeer, which I selflessly left to the male members of my family to try. The verdict: very sweet! 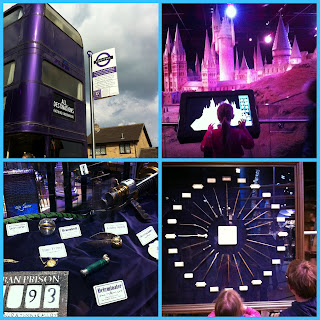 In the backlot you see the real 4 Privet Drive (and it’s next door neighbour) and the fabulous purple Knight Bus. There are so many great photo opportunities in this area. We posed with the Privet Drive sign, Hagrid’s motorbike and the Hogwarts Bridge.

Then it was back inside for the final leg of the tour. The Creature Shop was really interesting – showing some of the weird and wonderful animals, monsters, prosethics and make-up which went into creating everything from mandrakes to Buckbeak, the hippogriff.

Then it’s round the corner into the iconic Diagon Alley – this was what my younger son had been waiting all day for. It’s remarkably small, but so detailed and with so much to look at – from Ollivanders wand shop to Gringotts and the Weasleys’ joke shop.

We whizzed through details of design and construction. I would have loved to have a closer look, but the kids were starting to get tired. 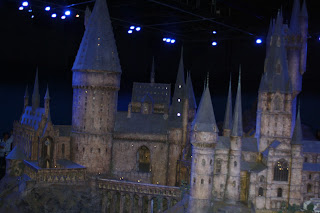 Then you get to see Hogwarts Castle in all its glory – a perfect, detailed castle which looks real in the films, but is really just an amazing model. It took 40 people seven months to build! There are lots of touchscreen information points around the castle, so the kids (and you!) can find out more.

And then our tour was over! We’d spent over four hours immersed in Harry Potter’s world (the average time taken is three hours) and we’d loved every second of it, as well as every wand and every potion bottle.

The Warner Bros Studio tour is a must for Harry Potter fans, but I think even non-fans would find it incredible. My husband is not a fan and was sceptical about whether he would enjoy it, but he was blown away by it.

Disclaimer: Warner Bros provided us with tickets and the wands in exchange for this review.