I have two high achieving kids in my younger two. My daughter is, as she will tell anyone who is willing to listen, ‘the second cleverest person in the class’. She is also very hard working and incredibly motivated, with exceptional concentration. My younger son is something else. He is quite ridiculously clever, but also extremely hard working and motivated and supportive of others.

As you can imagine, school report day is always a pleasurable one. Well, nearly always. Because my daughter can’t understand the difference between herself and her brother. Yes, she is very clever, but he is quite exceptionally clever. He gets a perfect report, she merely gets a near-perfect report with maybe one 2 or one B in a minor subject. So she cries. Because she doesn’t like to be anything less than perfect.

This year’s reports were as amazing as ever. My son got A for effort and 1 for attainment in everything apart from music – he got an A 2 (I might dispute that even, as he plays guitar and had to be moved up to work with older children as he was ahead of kids his own age). But it is the words which mean even more.

Words like: B2 had the ability to write at a standard significantly above that expected of a child of his age. He is a very gifted writer who should continue to develop his talent as he moves through the school. (Anyone who read his short story The Curer will know this to be true.) B2 is a very good mathematician, who shows great confidence in the subject. And, just as importantly: B2 is a lovely, enthusiastic boy and a valued member of the class. He is very motivated, enjoys a challenge and knows how to have fun in the classroom. 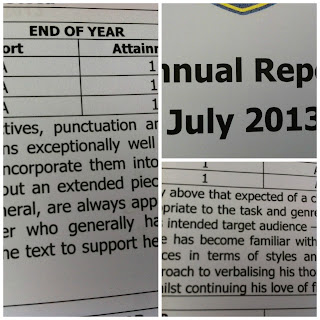 My daughter also got A for effort in everything. What more could a parent ask for? She got 1 for attainment in all of the key subjects, as well as many of the ‘less important’ (yes, I know they’re not really). She got a 2 in art and PE, both of which I would dispute. BUT she didn’t cry about it.

For her too, the words were something to be proud of and, I’m pleased to say, words which I know to be true. Words like: LG is a super writer who confidently uses a range of vocabulary and punctuation to effectively add detail and colour to her ideas. LG is an able, quietly confident mathematician who grasps new concepts easily and works steadily and systematically to practise and consolidate them. LG has been a joy and delight to have in the class throughout the year and I have thoroughly enjoyed teaching her and getting to know her better. She is a motivated learner who work consistently well and has made super progress. Thanks for a super year 2 – I am really going to miss you!

I am so proud of my kids and their reports. Not just because they are clever. That is the way they are. It is the fact that their teachers clearly like them so much and they are so hard-working and motivated which makes me proudest of all.

And I’m also proud to say that my daughter didn’t cry when she compared her report to her brother’s. Result!

I must admit to shedding one or two tears myself though…