My son went away on Scout camp at the weekend. I didn’t bat an eyelid. He’s been on so many camps I’ve lost count. He did a four day camp three years ago when he’d just turned 9 and a five day residential with school last year in year 6. So a weekend camp is NOTHING.

I admit I quite enjoy it. It’s nice to have one less person to think about/ worry about/ organise. I feel more relaxed with us as a textbook family of one mummy, one daddy, one boy and one girl. Everything is so much easier, everyone is so much more settled. 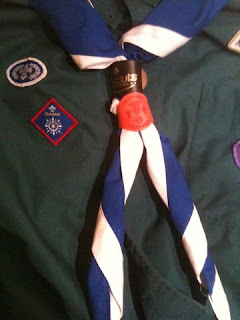 But then I got a text from another parent on Sunday afternoon, a few hours before my son was due home. I’m not sure why she sent it. I’m sure she meant well, but it unsettled me. She’d picked her son and a couple of other boys up early and, when they were nearly home, her son had mentioned that my boy wanted to go home too.

I had to get to him! My poor boy! On a hill! In the heat! Wanting to come home!

Suddenly I could feel the pull of the long-gone umbilical cord. We had other stuff to do, but all I could think about was my big boy and him wanting to come home. I calculated how long it would take me to get to him, locate him and bring him home.

I was halfway out of the door when I stopped to think.

Because if I know my son, he would have been having fun. Scout camp is where he’s at his happiest. He doesn’t worry about being too hot or too tired, it doesn’t seem to affect him.

I was unsettled, I couldn’t stop thinking about him. But I left him there and he came back on the minibus as planned.

‘Did you have a good time? Your friend said you wanted to come home.’

‘These mobile phones,’ said the Scout leader. ‘They should be banned.’

Too blimmin’ right! Stretching my poor umbilical cord all afternoon for nothing!