It was my eldest’s 12th birthday the other day. We bought him presents either that he’d asked for or that we’d guessed he would like and the rest of the family did the same. They were all lovely, thoughtful presents and he was really pleased with them all.

It was only when fellow blogger Chelsea Mamma tweeted me to ask what he’d had, that I realised his presents might be a bit strange. Certainly Chelsea Mamma, who has a son of similar age, found them rather unusual.

This is what my son had for his 12th birthday: 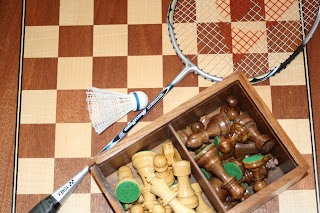 Is this the present list of a tween from 2013? Or is it a present list from the 1950s? Where is the iPod and the smart phone? Where are the gaming devices?

He didn’t have any. He didn’t even ask for any.

Clearly I am raising some sort of ruddy cheeked, outdoor, wholesome 12 year old in school shorts and shiny school shoes with scabby knees. Straight from the pages of Just William or The Famous Five. I am raising a Proper Boy. Like what they had in the Olden Days.

Now I’m not sure how this happened, but I’m guessing parental influence must have played a part – and for that I’m very proud. We encourage out kids to play outside and they do lots of outdoor extra-curricular activities.

My husband introduced my son to chess and he took to it like a duck to water. It’s a great thing to do on a dark winter evening – far better than being stuck in front of a screen – and he has a couple of ready-made opponents in the form of his Daddy Dad and brother. One of my siblings bought him his first Airfix kit sometime last year and, again, he really enjoys it.

Yes, my kids do spend time in front of screens. My eldest’s screen of choice is the good old telly. Sometimes he will need nagging to come away from it. He only uses the computer for his homework. This is his choice, not that he is banned from it.

But we don’t have a bottomless pit of electronic devices like many families with tweens. My husband and I both have iPhones and my son has a Blackberry, but this is for posing reasons only – it makes calls and he can text from it. Nothing else. We have one desktop PC and my younger son has a laptop he bought with his own money. For some bizarre reason it hasn’t connected to the internet for months. We have a Wii, two DSs and an iPad. And that is it.

The technology is there if they need it – for school work or entertainment, but it doesn’t dominate. Clearly we have given our kids sufficient other choices and opportunities that the technology comes second.