Running with my husband

Home » Family » Running with my husband

My husband has signed up for the Cheltenham half marathon. He did it on a whim a few weeks after I’d signed up. He’s run half marathons before. If memory serves me correctly, he did the Great North Run in 2008, 2009 and 2010, the Bath in 2009 and the Bristol in 2009 and 2010. He hasn’t run one since I started doing them myself. In the past his training regime went something like this – do a 10 mile training run once a week, get slight injury, make injury worse on the race, take three months off running, sign up for another race, do 10 mile runs once a week for three months… You get the picture.

Now he’s turned 40, he’s taking running a bit more seriously. As well as playing football once a week (and training my son’s football team), he’s cycling to work most days and is currently doing an eight mile run once a week and two or three five mile runs a week.

Now, you may be surprised to hear that I’m not competitive. I’m probably the least competitive person I know. If I come across as a competitive mum it’s only because I know what my kids are capable of – in sport, dance and academically. I want them to achieve what they’re capable of and try their hardest. And if they’re the best, I want them to be recognised and win the trophies. Anyway, I digress. What I’m saying is I’m actually NOT competitive.

But, I must admit I like to see myself as ‘the fit one’ in our family. But with all that sport, I was aware my husband could be catching me up or, God forbid, overtaking me. He could be the fit one! (The good news is, two ‘fit ones’ means two great roles for the kids.)

I haven’t run with my husband since the mid-90s when we trained for and ran the Nottingham half marathon twice. But this weekend we were staying at my mother-in-law’s. We could leave the kids with the mother-in-law and go for a long run together.

‘Is it a race?’ shouts my daughter. Now she IS competitive. She wants it to be a race and she wants Daddy to win. That’s Daddy’s competitive genes rubbing off on her.

We ran from my mother-in-law’s house to the far side of the next village. The villages are quite hilly, but we found a fairly flat route.

We set off and my husband said he likes to start off slowly. I don’t start off slowly, I don’t do fast bits and slow bits, I just run. My husband likes to set himself these little challenges and think about what he’s doing, but I just keep going. I don’t like to walk, but if I come to a hill I can’t manage, I walk it (there’s a very long, fairly steep one on my run at home that gets me every time).

He didn’t start off slowly, he ran at my pace, which was, apparently, a bit slower than his. It sounded to me like his legs and breathing were struggling a bit, but they weren’t. To be fair, he’s a lot taller than me, so his stride would be longer and he would therefore go faster than me running at the same pace.

He didn’t do any fast bits and slow bits and the slight hills didn’t cause us any problems. It was strange and quite nice to have someone to talk to, running is such a solitary activity for me. As we ran, he was already mentally preparing himself for the steep hill at the end. I didn’t give it a moment’s thought.

We ran to the far side of the next village, turned round and ran back. It should have been boring, but it wasn’t too bad. A mile from the end, I saw the hill. No way! It was very steep. I thought I’d have to walk it, but my husband wouldn’t let me – he was Bryn to my Smithy – ‘Smash it!’ I got up the hill better than I expected to (and maybe better than him!), but then a longer, steeper one. It’s only redeeming feature was that it was shady. This one was tougher, but I wouldn’t give in. If I’d been running on my own, I would have walked. But I didn’t want to be the one who gave up and looked weak – if my husband could do it, so could I. So I did it.

I ran eight miles – including a very steep hill – with my husband. Will we be able to run the full 13 together for the Cheltenham half marathon? And will he make me run faster? 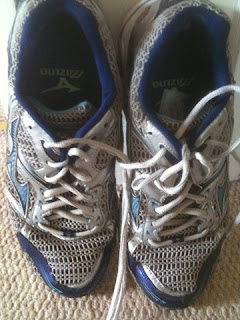 Sorry, no pic of me and my husband running. That was NEVER going to happen!