This is a little memory I’ve wanted to share for a while, but it’s SUCH a little memory I thought you might all think I was bonkers for sharing it. But then what did that fabulous Tara Cain do? She only went and gave me the perfect excuse to share my tiny little story, thanks to this week’s Gallery theme.

That’s me at around 30 weeks pregnant (maybe a bit more) with my eldest. And that’s the pink door of our previous house. We’d moved in just a few weeks before. It was a brand new house and I loved it. It was number 27, which had always been my favourite number (would you believe this bump popped out on the 27th?) and it had a blue door. But I didn’t want a blue door, I wanted a pink door. 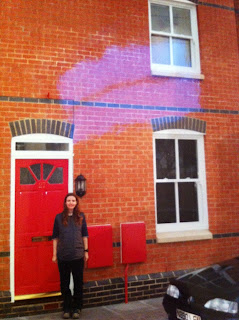 Being his beloved new wife and the centre of his world, carrying his first child, my husband of course agreed to paint the door pink. He sanded it, put some sort of base coat on it which had to dry for 16 hours and, finally, the amazing pink paint.

I loved my pink door, and so did lots of other people. I would be sitting in the lounge and I would hear people going past and commenting on how much they liked the pink door.

Fast forward three and a bit years and I had a very nearly 3 year old and an eight month old baby. We went on holiday to Disneyland Paris (unbelievably my eldest’s THIRD trip there) – we were cashing in on the fact they were both under 3 and could therefore travel for free.

On the last day, hours before departure, I fed my baby boy spaghetti from a jar. Then my husband took my big boy on a ride and I took my baby to change his nappy. And he was sick. Properly sick. Not baby sick. Even at this age he was baby sick at least 15 times a day, but this was real sick.

He was sick again shortly after and again on the Eurostar. Worrying about him rather took the shine off the end of our holiday and we had a long journey to make late at night. He wasn’t himself. He slept on and off on the train, but was out of sorts.

When we eventually arrived home in the early hours of the morning, we carried our sleeping baby to the door. He woke, saw that pink door and smiled and kicked his legs. He was our baby again.

I wrote this post in response to a prompt on The Gallery at Sticky Fingers. Pop on over to see how other people have interpreted the theme ‘door’.