How does your garden grow?

Home » Family » How does your garden grow?

‘Sairy, Sairy quite contrary, how does your garden grow?’
‘With moss and clover and daisies. And stinging nettles all in a row.’

(FYI, you don’t have permission to call me ‘Sairy’, it’s just a bit of artistic licence for the purposes of this post.)

I love our garden. It’s bigger than most (although a VERY funny shape) and it’s got lots of lovely trees, which give us some really beautiful blossom. But it’s a bit, er, UNKEMPT.

When we moved in nine years ago, we ripped out some overgrown hedges at the back, put in a new fence and a bit more grass. And that was it.

We have no flowerbeds. We invest precisely no love in our garden. It just does its own thing.

At this point I’d like to mention my great blogging friend Suzanne from 3 Children and It. Suzanne and I have a lot in common, so much so in fact we are blog twins. We both have three kids of similar age – two of one sort and then one of the other. And we have a similarly slapdash approach to housework prioritise our kids over housework. So when she posted about her beautiful garden a few weeks ago, I’ll be honest, I felt she’d let me down a bit. Where was the sisterly solidarity?! Who is left now to share my lazy ways put the kids first? I was relieved to discover it was largely the OH who had made the garden beautiful while she had taken on an important supervisory role.

But, I thought, if Suzanne can boast about share her beautiful garden, then so can I…

I mean, look at this… I’m sure you’ll agree, that’s pretty special. It’s an achievement to get them that tall. That takes high levels of neglect. 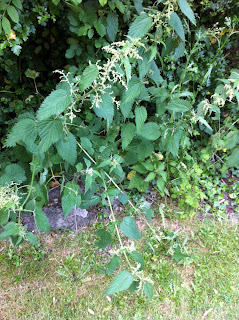 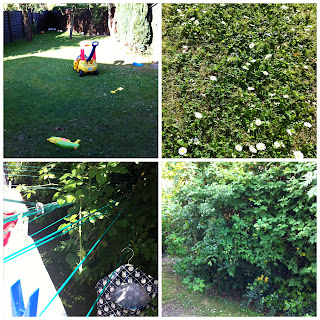 You may wonder why there is a toddler car in the middle of the grass, when the nearest thing we have to a toddler is 7 years old. Frankly, so do I. But I’ve discovered that it’s so the boys can stand on the roof of it and picky the tiny apples off the apple tree before smashing them with a tennis racket.

Ooh, an apple tree, how lovely, I hear you cry! Yes, it’s really massive and really beautiful and produces as many as one edible apple a year – the remaining 5,000 being eaten by wasps and bird before rotting away on our grass like this… 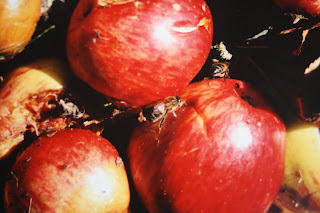 Now, don’t get me wrong, I’m quite proud of that photo, but the reality of thousands of smelly apples squashed into your grass and swarming with wasps isn’t so appealing.
Moving on, look at my washing line! It’s been taken over by a hedge! Of mainly spiky blackberry bushes! Lucky me, as I try to peg up the knickers and get ripped to shreds.
And in the picture next to it you can really appreciate the sheer size and unkempt nature of the hedge and its many species of Hedge Stuff (technical, scientific name).
And who could forget my trampoline and the missing fence Well, the fence was replaced suddenly and without warning while we were at work a couple of weeks ago, which is good news. The downside is, we might want to take a look at our trampoline and either refurbish or get rid because it’s kind of heading back to nature right now. 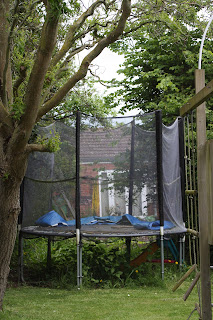 And then there’s our grass, of which we have plenty. Well, we have plenty of green underfoot which is suitable for playing football on and is cut with a lawnmower. On closer inspection it turns out that the front garden is 20% moss, 70% clover and 10% grass. The side and back gardens (yes we are so posh we have a side AND a back garden) are about 80% daisy, 20% grass.
So that’s my beautiful garden. I’m sure you’ll agree, it really is something else.