Anyway, lots of other bloggers agreed with me that this is pretty disgraceful and came up with some suggestions, with varying degrees of honesty involved, on how we should get my son some free prescription sunglasses. Thank you to all of you for your suggestions, they were much appreciated.

Now dishonesty, even if it’s something I am morally entitled to, doesn’t sit well with me. I am a hopeless liar. I can’t negotiate prices of things. My husband is brilliant at it and I have to walk away, because it makes me squirm. I would be the one saying ‘Well, shall I just pay you an extra £20?’ rather than knocking a couple of hundred quid of something. So the thought of going into an optician and telling them my son was having headaches and needed his eyes testing, or he’d sat on his glasses and broken them, didn’t make me comfortable.

I am very grateful to bloggers Mummy Barrow with her Ranty Friday and Victoria at Verily Victoria Vocalises who helped me get my message out to a wider audience. I’m especially grateful to Victoria who had the balls to copy Specsavers in on a tweet – something I would never be brave enough to do. Yes, I am a wuss. We got a tweet back explaining their position and I also got a long comment on my post from an optician explaining their difficulties, which I do appreciate.

I do understand their position re the NHS and funding and I realise that with every offer terms and conditions apply BUT if the terms and conditions are that you must be one of the approximately 1 in 12 kids who is lucky enough to have their eye test in April maybe they should spell this out a bit better for the benefit of the 11 in 12 who aren’t and will never be eligible. Ironically, my son used to have his eye test in April. But it was at his October test when the powers that be decided he was old enough and his prescription was stable enough to move from six monthly tests to annual tests. So his test will always be in October and he will never be eligible for free sunglasses.

And then, through the power of social media, I struck gold. Blogger Chelsea Mamma remembered a post she’d read some time ago by a blogger I wasn’t familiar with. Annie QPR had written about her positive experience with an online optician One Stop Glasses She’d used One Stop Glasses to buy an identical pair of glasses to her favourite pair for a fraction of the price. 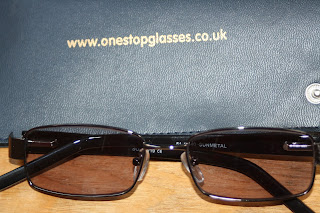 So I checked it out. It was amazing! There were 10 pairs of prescription sunglasses available (I only looked at adults’ glasses because my son has a big head!). Not all of them were suitable for a 9 year old boy, some were clearly too big. But I found a pair that he liked which came in a small size. All I needed was the details of his prescription. And they cost £25! Not £94!

Just a week after I’d blogged about it, his new sunglasses arrived. That’s the power of social media! My son was so pleased with them – he was even excited about the case! The sunglasses fit well and they look good.

Now all we need is the one thing not even social media can sort out for us. Some sun. 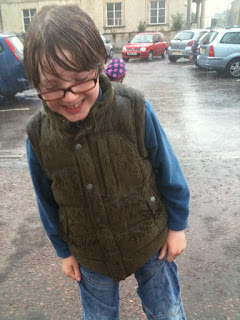