Swimming lessons aka the new Wednesday

It pains me to say this, but my family has been doing swimming lessons for OVER SEVEN YEARS.

My eldest started at the age of 4 and a half which, it turned out, was a bit late for starting swimming lessons. At 4, they can go in the water unaccompanied, but only if they’ve passed the ‘accompanied’ toddler stages which go before. So we spent a year in the water with him before he was ready to move up. In the meantime, his little brother started too.

Swimming lessons were a Saturday morning thing and the boys slowly and painfully moved through the stages – two toddler stages and the seven unaccompanied stages.

For a particularly tough year, we had to abort the Saturday mornings the swimming pool flooded  Seriously. You couldn’t make it up. For that year we travelled to the complete opposite side of town for lessons at a different pool on a Friday evening. We were out of the house for a thoroughly depressing two hours just for a half hour swimming lesson.

And still my boys could hardly swim. In July 2008, at the end of year 2, my eldest brought home a 10m swimming certificate from school. Two and a half years after he started lessons, it appeared he could FINALLY swim. 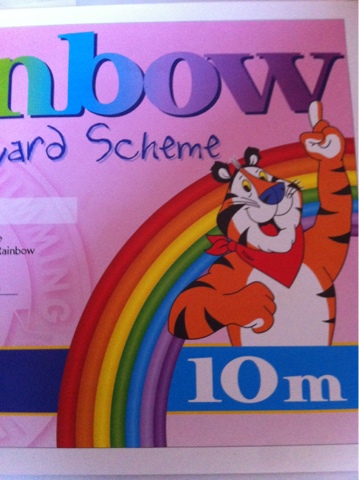 Around her 3rd birthday, my daughter started on Saturday mornings at the swimming pool. She went early in the morning and the two boys went later (at different, consecutive times).

When my younger son started football on a Saturday morning, we moved to a Thursday evening. First for the boys, then for all three of them. My younger son had caught his brother up at this point, which made life easier, but sitting at the swimming pool for an hour at teatime was still not my idea of fun.

And then the boys stalled completely. They went from one crap teacher to another. So we moved them. To a Tuesday This was the worst possible time – sandwiched between work and my own dance lesson, but my obsession with the boys making progress over-rode all rational thought.

This time last year, in years 6 and 3 respectively, they made it to the final stage. I gave them two terms to pass it. They didn’t pass it, but I pulled them out anyway. We were all thoroughly fed up with swimming lessons. They could swim well enough. They were never going to be Olympic champions. We’d all served our swimming time.

In the meantime, my daughter had moved from Thursday to Wednesday and all responsibility had been taken out of my hands. For 18 blissful months, my mum took my daughter to her swimming lessons as she moved slowly through the levels (a lot faster than her brothers, to be honest).

Now everything has changed again. After the crappy weekend trying to book swimming lessons we have ended up with a time which isn’t suitable for my mum. We’ve reached a compromise. As I can’t guarantee to be home from work in time to take my daughter, my mum will take her and I will go to the swimming pool as soon as I can to take her home.

So we’re back to microwave meals for the foreseeable future. I daren’t risk trying to move her to a different lesson time while she stays on this level for fearing of losing her place altogether. So this is my new Wednesday. For the next six or nine months. Lucky me.