A couple of months back, I blogged about an amazing little gadget I had been given to review, to see if it could sort out my acne. And hopefully my eczema too.

The SQOOM is a handheld device which vibrates so gently you can’t feel or hear it. With the right lotions and potions, also part of the SQOOM range, it can cure acne and eczema and can even be used as an anti-ageing treatment (in fact, that’s what it’s mainly used for). The lotions are all natural, which makes a change from what I usually use to resolve my skin problems. 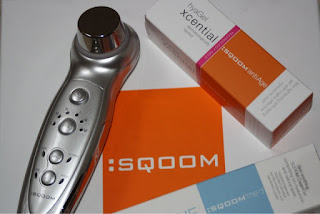 Since posted the introduction to the SQOOM and following earlier posts on acne like this one and especially this one I’ve discovered there are a fair few grown ups out there suffering from acne. I always thought I was the only one.

The original plan with the SQOOM was for me to test it for six weeks, then give it back. I’ve been going six weeks now and I haven’t had results yet. But as people have been asking me about it, I thought it would be a good time to post a progress report.

The SQOOM looks complicated, and so do the instruction booklets. It’s not! It’s really simple to use, which is great for a technophobe like me. It charges in the shaver socket – or toothbrush socket as it is better known in our house – and holds its charge really well.

My original plan, to avoid having a massive, hideous relapse of both acne and eczema, was to keep going with my existing medication while I used the SQOOM and gradually come off it. I’m currently on Limecycline (antibiotic tablets) and Zineryt (antibiotic topical lotion) for my spots. My priority was to cut down on the tablets. But a mix-up with my prescriptions at the pharmacy decided for me this wasn’t going to be the case. I didn’t get my Zineryt one month, so I carried on taking the tablets and using the SQOOM. From the way the acne on my back spread (I don’t usually worry about my back), I’d say the tablets were pretty ineffective anyway.

For the eczema, which is just on my hands, I wash in Dermol, which is a moisturising lotion, and I use a steroid cream before bed. As the SQOOM had to be done just before bed, I was forced to drop the steroid cream.

For the acne, I cleansed my face with the SQOOM for four minutes every other day, then did the acne treatment for eight minutes every day. Luckily, I managed to do this easily whilst watching the television just before bed.

Because the eczema is on my hands, it really did have to be done last thing at night, because you’re not supposed to wash the solution off. So I had to do it sat in bed after I’d been to the toilet – four minutes on each hand.

So how is it working? Well, I was warned it would get worse before it got better… My acne got worse almost straight away, then it started to get better, then it got worse again. Right now I would say it’s behaving exactly as it always does – a bit better and a bit worse, with no overall definite improvement.

The two things which really make my eczema bad are cold weather and cleaning fluids. As soon as I started using the SQOOM it snowed and we had a really cold couple of weeks. Then my dishwasher broke and I was forced to wash up for a week. Then the weather went really cold again. I found it difficult to use the SQOOM on my fingers and the edges of my hands. They were getting very painful and cracked, to the point where I could barely straighten my fingers. So I decided to stop using it and go back on the steroid cream until the weather improved. 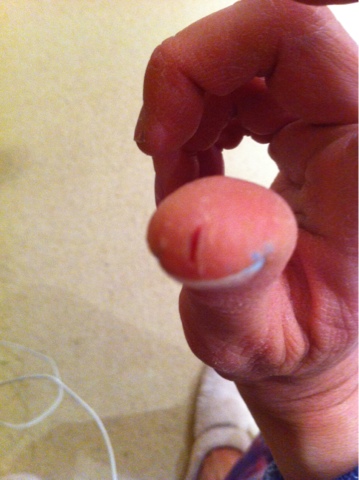 This picture is hard to make out, but that’s my thumb with a nasty crack in it caused by my eczema. It throbs and bleeds regularly. It’s amazing how many a times a day you need that bit of your thumb.

Although I have anti ageing lotion, I haven’t attempted to use that yet. The process isn’t difficult, but it is quite time-consuming and I think I have enough to do with the eczema and acne treatments at the moment, without trying something else.

I was lent a SQOOM and given gels for acne, eczema and anti-ageing to help my skin and for the purposes of this blog. I am not receiving any payment and all opinions are my own.

Currently SQOOM is only available from Harrod’s pharmacy or online at www.sqoom.com The starter pack costs £529 for the unit and two gels. Gels retail at £79 and last approximately two months.