I’m very grateful to Sonya Cisco aka rock’n’roll mum who recently named me in a list of fantastic bloggers as someone she thought would be worthy of a MAD blog award – or a nomination or two at the very least! And she shared some random facts about herself.

So here I am, returning the favour – naming some people who I think are worthy or your nominations and sharing some weird facts about me. Nearly 500 posts, and just over 18 months into my blogging career, it’s really not easy to find something to say about myself that I haven’t said before. But I’ll do my best. And BIG apologies if I have told you these before. I’ve had three kids AND I’m getting quite old – my memory isn’t what it once was. Now, what was I saying?

I worked in McDonald’s for four years. Even though I’m vegetarian.

I did basically two years’ part-time while I was at university and then two years full-time after I graduated. This was the mid-90s – the last time when it was really hard for young people to get jobs. I didn’t hate it, it was OK. Even though the customers were rude. And I had to empty bins. And sometimes clean toilets. And touch meat. To this day I can still multiply 288 really damn fast though – 288, 576, 864, 1152…

I’ve always liked the number 27. I don’t know why, it’s just odd – in the numbers sense and in all senses. The house where we lived before, which we moved into when I was pregnant with my eldest, was number 27. I was so pleased with that. Then my son was born on the 27th. Two out of my three nieces and nephews were also born on the 27th. 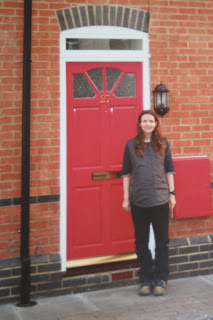 Me outside number 27 at around 30 weeks pregnant. Yes, the pink door was my idea

Yeah, I know. I can hear you from here – ‘well give them to me then’. I’ve heard it 100 times before. I just don’t like them. Again, I don’t know why. They’re just so small and so blue. And so not pound coins or tenners. It was a sad day when cash machines started giving them out again. You take out 20 quid and you get four fivers. What’s that all about?

I have an unusual middle name.

It was my great grandmother’s name and she died just before I was born. I hated it as a kid, but from the age of about 15 I liked it – it was quite cool. So I gave it to my daughter for her middle name. Very, very occasionally I come across people with ‘my’ name. I ask them if it’s their real name. And it isn’t. It’s a nickname. And, no, I’m not going to tell you what it is because if you’re a crazy stalker you will be able to track me down loads easier. (And if you know me, don’t write it in the comments or on Twitter, please, thank you.)

I did karate between the ages of 12 and 22 and I’m a brown belt. These days people get to brown belt in about five minutes, but in those days you had to work at it. People ran karate clubs for the love of it and you paid pennies to go there. These days it’s big business and parents are dishing out £50 left right and centre for their kids to earn a little tag on their belts. I COULD have progressed further than brown belt of course, but this was GCSE, A Level, degree and looking for a job time. One day I just didn’t go. And I never went again. I still don’t know why.

I had short hair as a kid and was always mistaken for a boy.

My hair was very short until the age of 13 when I decided to grow it and never looked back. It’s only even been trimmed since then. The ages of 11 and 12 were the pinnacle of my ‘mistaken for a boy’ years, when I was thought to be a boy approximately 80% of the time.

Sadly I couldn’t find photographic evidence of the boy hair, working in McDonalds or the karate, although I know this stuff existed in the past.

So there’s a little bit more about me you really didn’t need to know.

And now for the important stuff, the amazing bloggers. Unfortunately for them (and me), all the blogs I read are the sort similar to my own – the family ones about school age kids, so it was hard for me to decide who to nominate for the MAD blog awards as they’re all brilliant and I would give an award to all of them.

But here they are…

Any of these ladies would also warrant the best blog and best writer.

No pressure, ladies, if you want to share some random stuff and let us know your favourite bloggers, please do. And if you don’t, just take the (very well deserved) compliment.