I’ve always loved my younger son’s feet. They’re big and wide and strong and kind of funny. He’s 9 and his feet are a 4 1/2 H. At times we’ve struggled to get shoes for him because his feet are so wide. But they’re his feet and I love them. I love them all the more for being funny.

A few weeks ago, on Boxing Day, his feet and legs stopped working This caused me great concern. And the doctor who spent an hour moving his legs and feet around. And my lovely, caring blog readers who all wished him well and hoped things improved soon. I promised to report back.

The day after his legs stopped working, he could walk very short distances, very high up on his tiptoes. We managed to go to the pantomime by parking just opposite the theatre. It was a lovely treat for a boy who had been stuck inside ill all Christmas. The next day he was pretty much back to normal. His normal. Walking on tiptoes most of the time.

We managed to get a referral for physio at the hospital to hopefully get him walking PROPERLY normally. Not just normally for him. My concern was that he was going to do himself some damage or that he would never walk properly. In a way, the illness had done us a favour because it had brought the situation to a head and made us realise we had to do something about it.

This week we went to the physio. As he lay there having his feet flexed this way and that by the physio, I realised that what I loved about those feet was what was wrong with them. They looked kind of funny, because they were funny. They were too flat. They didn’t flex and move like other people’s. Yet they’ve never, not for one minute, held him back.

The physio had him walking up and down – on his toes, on his flats, on his heels. He CAN walk on his heels and that is a really good thing. His toes don’t lift up far when he does, not as far as other people’s, but the fact that he can do it means his problem is habitual and can be solved.

At some point, I think when he was about 4, he started walking on his toes for fun. It became a habit. His muscles tightened and then he found it hard to walk any other way.

Now he has to do two things – break the habit and loosen the muscles. He has exercises to do – four different ones which he needs to do morning and evening. I suspect this will cause problems. I remember how much of a hassle I, as a rational adult, found doing physio exercises. But we all know he’s got to do it. If necessary, bribery may be involved. Hopefully it will only be for a short time.

And he’s all taped up. He’s got a strip of blue tape down each of his legs (they are equally affected) and onto his feet. If he walks on his toes, he will feel this pulling. It will be uncomfortable and he will instinctively walk on his flats. This should stay on for 3-5 days, then will be re-applied next week. Hopefully it will help break the habit.

Very soon, my son’s feet won’t be funny any more. But I will still love them. 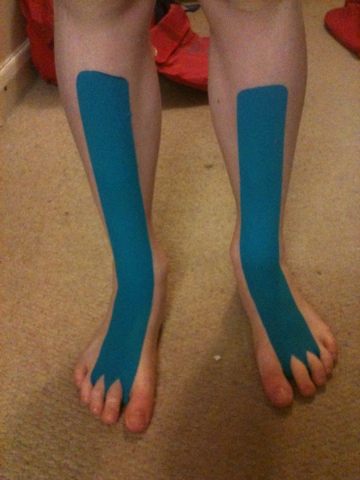