My kids have something new to watch on the telly. In a break from the endless Simpsons and Wii games which usually dominate our winter months, they have discovered their own lives – on our old video camera.

The video camera was a short-lived novelty (before iPhones) bought with an unheard-of bonus from work at a time when we were broke. It would have been easy to chuck that money into the pot for day-to-day living, but as I’d worked hard for it, we decided to buy something special. So we bought a video camera.

We have discs of birthday parties and holidays and unwrapping Christmas presents. But we have every day life too. And those are the best.

The kids’ favourite is my younger son, aged 4, relating his day at playgroup. His tone of voice and his mannerisms haven’t changed in five years, but he looks so cute and babyish. He has a slight lisp and you can see how hard he’s thinking to remember every detail of his day:

‘Turn over the sandtimer, five minutes left to play, wash hands, eat snack, put on coats, go outside, come back in, sing some songs, grown ups come in, go home.’

It’s so sweet, but the kids find it hysterically funny. They can’t believe how much they’ve grown and changed in that time.

On the same disc, my eldest, aged 6, who always likes a negative story, relates the tale of when Mummy let go of the buggy. Oh the shame. My 4 year old was riding his bike to school, lost control and fell off into the road. I went to pick him up, forgetting all about the buggy. Luckily my 6 year old spotted it and pulled it out of the road. The big hero.

‘I rescued the buggy!’ he says proudly.

‘But I rescued my bike!’ shouts his little brother from off camera.

Thank goodness he was there that day. But what a shame he had to record it for posterity, so we will never be able to forget mummy’s stupidity. 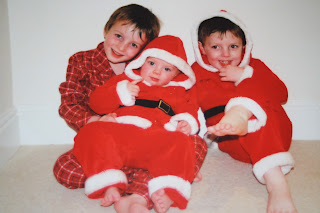 Watching the video of the two younger kids in the bath reminds us of just how full-on parenting small children is. My daughter, aged about 20 months is having her hair washed and she is screaming blue murder. My son is bashing bubbles against the tiles and shouting ‘Kill the bubbles!’ over and over again. Then he gets buckets of water and chucks them in his own face and giggles. Until he swallows and inhales and starts retching and choking. And my daughter is still screaming

My daughter’s hair wash complete, she transforms. An evil smile appears on her face.

Speech wasn’t her strong point at this age. Baba was her name for her brother – which bears no resemblance to his actual name.

And while Baba had his hair washed, his sister poured bucketfuls of water onto the bathroom floor.

‘How did we cope?’ says my husband as we watch – and my kids screech with laughter at how funny they used to be.

I really have no idea how we coped. But we did. It’s a great reminder of how far we’ve come – as well as being VERY entertaining.