Home » Family » What a performance

It seems like over the past couple of weeks all I’ve done is watch my kids perform. I’m sure we didn’t do that many performances in ‘my day’. It’s lucky that I really enjoy watching them.

So we’ve had my eldest playing the violin in his secondary school concert, which was amazing. It’s incredible what kids of that age can achieve.

Then my daughter danced at an old people’s home and just blew me away with how good she was – it was like she was doing a duet with the assistant teacher while everyone else just swayed slightly behind. She did it all again a few days later at the end of her lesson for all the parents, grandparents and siblings.

Then we had my daughter in Christmas with the Aliens which was as funny and cute as a nativity should be. With aliens.

My daughter did a Christmas flash mob in the town centre. OK, I took part in that too, but the rest of the family had to go along and watch.

Tonight my younger son will be in his school concert. He will be singing with his class and with the whole of Key Stage 2, as well as playing the guitar in the school band.

But my favourite performance of all has to be the Beavers, Cubs and Scouts Christmas show. It’s not a play, it’s just the kids showing off their talents. It hasn’t been rehearsed to within an inch of its life – or hardly at all, really. The kids decide what they want to do and they get up on that stage and they do it.

My younger son did ‘magic’ with his best friend. They really performed it – they looked up, they spoke clearly, they got a laugh and the magic worked. I was so proud of them.

My eldest played a solo on his violin very well and got a round of applause for his trouble.

Collectively the Cubs sang two songs – a Christmas song which ran through all the letters in ‘Christmas’ and said something positive about each – candy canes and reindeers and stuff. They had learned the Matakon signs to accompany the song, which was brilliant.

But the best bit of all was the ‘Twelve Scouting Days of Christmas’ sung by the Cubs. Highlights included ‘nine upset parents’ and ‘two smelly socks’, but the line that got the whole room singing (and giggling) was the legendary ‘five spotted dicks’. With a photo of a pudding of course. What else were you thinking of?

There was also jokes, music, break dancing and a brilliant re-telling of Cinderella with letters swapped around to make the words funny. And I can’t remember any of them now, apart from Nindercella. Should have written them down. Grrr!

When we got home my daughter asked, ‘Why did you sing about spotted willies?’. When told it was a pudding, she replied, ‘Oh, I thought it was a willy.’

I will leave you with two of the jokes which actually made me laugh out loud.

How does Good King Wenceslas like his pizza?
Deep and crisp and even. 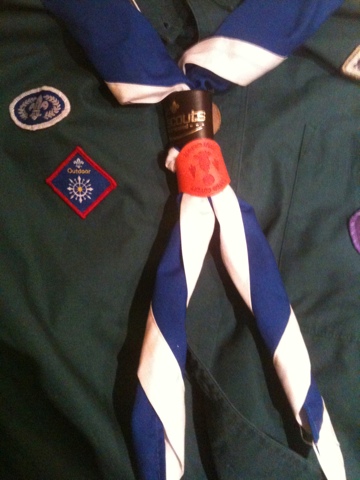