The joys of fussy eaters

Home » The joys of fussy eaters

‘Daddy, I don’t much like food from fields’ my daughter announced at the table. And what poisonous ‘food from fields’ were we trying to feed her? CORN ON THE COB. It’s the same as sweetcorn from a tin, which she will eat, but a bit nicer.

To food from fields you can add food from trees, food from foreign countries and any food that is mixed up and includes sauce. The only food my kids really like is food from cows or food processed to within an inch of its life then frozen.

Before I had kids I never believed people who said their kids only eat chicken nuggets, I thought it was the parents’ fault. MY kids wouldn’t be so fussy. Sadly, in the case of number 1 son, I would love it if he even ate chicken nuggets. He’s that bad. From the moment he first turned his nose up at baby rice, he’s been trouble.

As a new mum, I admit I made mistakes. I’m a vegetarian, so didn’t want to cook red meat. I decided to raise my child on chicken and fish. We did it all by the book. The Annabel Karmel book. And he ate it. Fish pie, chicken casserole, veggie lasagne. Then something went wrong. We started giving him fish fingers occasionally and suddenly he wouldn’t eat fish pie. Then suddenly he wouldn’t eat fish fingers either.

People say to me ‘He’ll change’ ‘He’ll eat if he’s hungry’. But he won’t. He’s incredibly stubborn. For four days on Cub camp he ate nothing but Marmite sandwiches. Just about OK for four days, but what about when he goes on camp for a week? And it’s not as if he has a small appetite – he eats four Weetabix and drinks gallons of milk for breakfast. But if there’s nothing he likes, he will opt for starvation every time.

So what will he eat? Wheat – as pasta, bread or pizza and of course Weetabix. Potatoes – in any form. As far as fruit and vegetables go he can manage apples, bananas (but only very spotty ones), the odd grape, sweetcorn (but not on the cob!) and baked beans. He likes Marmite sandwiches and cheese on potatoes, pasta, toast or sandwiches. And fish cakes, only Bird’s Eye ones. It’s not that unhealthy I know, but it’s not that healthy either.

Another new mum schoolgirl error I made was to wean him off apple juice. I was so smug that I stopped him drinking sugary (albeit pure) juice on to water, but now he won’t touch any liquids apart from milk and water. In the one sense good, in the other – a pain in the arse. Because he doesn’t really like water enough to drink much of it. He has two cups of milk at breakfast and two at night, yep, just like a baby, and very little liquid in between. So back at Cub camp, or on holiday, where milk isn’t so readily available, he’s not drinking enough. Just because I thought I was a really right-on mum doing the best for my child (and perhaps I also wanted to show off a little bit to older mums).

Then there’s my field-o-phobe daughter. She has a tiny appetite. I make her meals precisely half the size of her brothers’. She takes about four times as long to eat them and rarely even finishes. But when it comes to chocolate biscuits or cakes, strangely her appetite is exactly the same size as theirs. It doesn’t matter how many times I say ‘no’ to requests for snacks between meals or pudding when she hasn’t finished her main course, she still keeps asking. And when Mummy says no, she knows precisely the right level of cuteness required to get Daddy or Grandma and Grandpa to say yes.

I learned from the error of my ways and didn’t repeat the meat or drink mistakes. She therefore eats meat and drinks both orange juice and apple juice, which is lucky really as she would never EAT fruit. Apart from, bizarrely, olives, which she loves. She’s not keen on pasta and eats as many/ few vegetables as her eldest brother.

Ironically, the only one of my children that eats normally is my younger son. He was on jars full-time from eight months because Mummy and Daddy had our hands too full for pureeing. He had fish fingers and potato waffles in his bowl from nine months and his first McDonalds at 11 months.

There’s a lesson in there somewhere, but I’m not sure what it is. 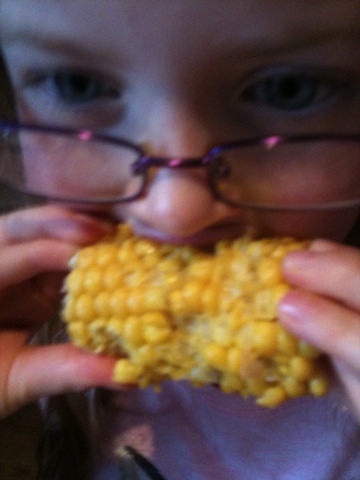