My girl is a dancer through and through. It’s not just that she does dance classes, it’s more than that. She dances all the time and we love it.

As Abba once said (in Thank you for the music) ‘Mother said I was a dancer before I could walk’ and that’s what I do say. She used to stand grabbing on to furniture and move her bum in perfect time to the music before she could walk, or even stand up unaided.

Fast forward a few years, and she dances in the street, she dances in shops, she dances in the park, she dances aywhere and everywhere (although I suspect not school, because she’s way too disciplined). Her dancing is innocent. She is not showing off, she’s not attention-seeking, she’s dancing for the love of it. And the more she does it, the better she gets.

We did a flash mob with our dance school recently, which was very exciting. It was a simple routine designed so that anyone could learn it easily. I rehearsed and rehearsed that routine. Even though it was simple, it was very easy for me to make a mistake. Being so young, my daughter only danced the last minute or two of it, yet she knew it all perfectly. She knew it way before I did. She’d come up with her own ways to remember when you went left or right or which move came next. She helped me learn it. 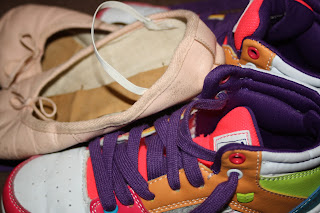 After Easter, already aged 6, she started ballet. She’d never done it before, but had always dreamed of it. Most girls start ballet when they are 3 or 4. I’m so grateful that her teacher let her join straight in with girls her own age from her own school even though she was a late starter.

Only a couple of months after she’d started, we went along to a ballet class to watch. She wasn’t the best, of course she wasn’t. But she wasn’t the worst either. She was probably about in the middle. No-one would ever have guessed she’d been doing ballet a few months.

Unbelievably, perhaps, she’s about to do her first exam – her Primary – just like the other girls in her class, the girls who’ve been doing ballet since they were 3. They have to practice at home. We hadn’t quite got round to it. I promised her we’d do it just as soon as we got the flash mob out of the way.

After class, the teacher came to tell off  talk to the mummies. It was obvious, she said, who hadn’t been practicing. The girls weren’t in time with the music and were copying each other – mistakes and all.

And then she said it… ‘Ironically, though, the only one who is doing it on her own and not copying…’ My daughter.