The Gallery: Back to School

Home » Family » The Gallery: Back to School

The Gallery has been on my radar for some time, but I’ve never actually taken part. This week the theme is something particulary close to my heart – back to school – and I decided it was time for me to take the plunge and join in.

My biggest boy isn’t just going back to school, he’s started his new secondary school. He’s there RIGHT NOW. I hope he’s OK, I’m sure he will be. He’s one of those kids that just lets things wash over him – he doesn’t get stressed or nervous or excited.

But I have a problem. When I started blogging I resolved not to include pictures of my kids – to protect their anonymity. More recently I’ve shifted my own goalposts and now I don’t include RECOGNISABLE pictures of my kids. So you might see pictures of them as babies or toddlers or recent ones from funny angles.

I’ve taken some beautiful photos of my boy today. He looks gorgeous and grown up in his blazer and tie, but I know I can’t betray his trust and publish them.

So what to do?

Use a photo from his very first day of school, of course!

This is him and his little brother, aged nearly 2, from back in the day when photos were taken on cameras with films and you crossed your fingers and hoped they turned out OK when you picked them up from Boots weeks or months later.

Well this one did and it’s still one of my favourite pictures ever.

It’s also a little bit of history because I knocked that hideous 1970s wall down in my car a year or so later with the little brother in the front passenger seat. Luckily we were both unharmed! 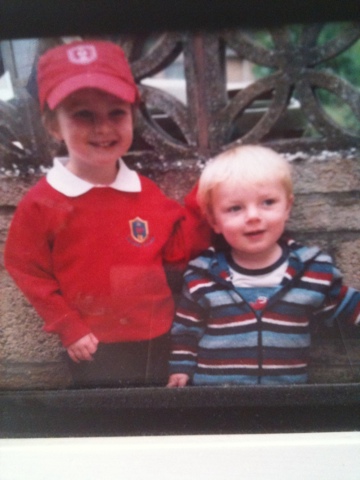 This post was written in response to Week 113 of The Gallery on Sticky Fingers. You can go and take a look at some others too!