The kids are fascinated by the back-stories of the Paralympians – were they born like that, did they lose a limb in an accident, did they lose it in a war-zone? Either way, the Paralympians are true heroes. They train as hard and make the same sacrifices as the Olympians, but they are doing this while coping with a disability AND with the prejudice that can bring.

Twenty or 30 years ago, the kid in the wheelchair, the kid with one arm, the blind kid or the deaf kid would have been left out of games lessons at school and out of sports clubs, but now they are out there making their whole country proud. It’s fantastic the way sport has adapted to allow them to compete and it’s fantastic the way the British public has embraced them for the sportsmen and women they truly are. My kids have taken to their hearts Sarah Storey, Ellie Simmonds and Johnnie Peacock in just the way they took Jessica Ennis and Mo Farah to their hearts.

To me, the London 2012 Paralympic games has been an even bigger success story than the Olympics. The Olympics is ALWAYS a big deal, even when it’s not on home turf, but I’ll hold my hand up (and I’m sure plenty of others will join me) and say I’ve never really been interested in the Paralympics, in Paralympic athletes and Paralympic sport. Until now.

I was desperate to go to the Paralympics and spent days trying to get tickets. I didn’t mind what I went to or when. My only criteria was it had to be the Olympic Park. The Paralympics wasn’t second best or a compromise for not getting the Olympics, it was something we all wanted to do. After four days of trying I finally got my tickets – and for athletics! My number 1 choice.

I was so pleased to go along after we’d seen so much of the Olympics and Paralympics on TV – it all looked so familiar and so amazing. After just a few short weeks, the stadium, the Orbit and the whole of the park has become iconic. I had no idea where we were sitting and I didn’t really care.

But as we entered the stadium I gasped. We were right by the flame. The most iconic image of them all. We were so close we could feel the heat.

We had a morning session and it was absolutely packed with events. There wasn’t a second to get bored. We saw heats for 800m, 200m and 100m in both men’s and womens and a number of categories – T54, T46, T34, T11, T12 and T53. I don’t fully understand the categories, but we basically saw wheelchair racing, blind racing (where the athletes run with a guide) and athletes with only one arm racing over the various distances.

We also saw field events – men’s and women’s shot put, men’s javelin and men’s long jump. It was harder to focus on the field events as they were so far away – we couldn’t actually see the men’s shot put at all. They field events carried on for the duration of the session, with races taking place every few minutes.

We saw world records broken, in the women’s shot put and one of the track events. We saw medal ceremonies for the men’s long jump and women’s shot put as well as for events that had taken place the previous day.

The whole thing worked like clock work, with teams of Games Makers coming on between all the events to make the necessary adjustments to the track.

All in all it was an amazing experience and an amazing atmosphere. I am so glad we got to go along and I’m so glad the kids will be old enough to remember it. They will grow up being positive about disability and about what people CAN achieve, not what they can’t achieve. 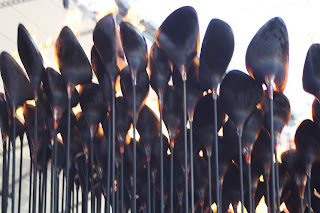