How I met my husband

Home » Family » How I met my husband

My husband was the best friend of my male housemate. There was just me and two men in my house, which was miles away from anyone else’s house. I tagged along on that Thursday when my housemates went out with their friends and I met the man that was to be my husband.

He didn’t make an immediate impression – apart from that he was tall, very thin and ginger and wearing blue Doc Marten’s. The Doc Marten’s were a very good thing. I felt a bit intimidated by him and everything around me – people I didn’t know, people who had already done a year at university, people who seemed very grown up and worldly.

After that, I saw him quite a lot. He used to come round most Saturday afternoons while my housemates were lazing in front of the telly. He shook them up a bit – made them get up off their fat, lazy arses. He had more life in him than they did.

It wasn’t long before I realised he was a nice person. And they weren’t. I used to look forward to him coming round. But I didn’t fancy him. He was just nice to me and they weren’t.

Fast forward a few months to May 1993. I was going clubbing with my best friend on a Thursday, as we usually did. As I was about to leave, my housemates suggested I go and ask their friend to go out with us. They obviously knew something I didn’t. And they did me a big favour. The end of the year, the end of the course for my husband, was fast approaching. If nothing happened, we would never see each other again.

So I called for him and he agreed to come out clubbing. At the end of the night, he walked me home – it was a couple of miles, then came in for a chat and some crisps.

He finally left at about 4am, just as it was getting light. And we kissed. And we’ve been together ever since.

A month later we celebrated his 20th birthday. And now we’re celebrating his 39th. 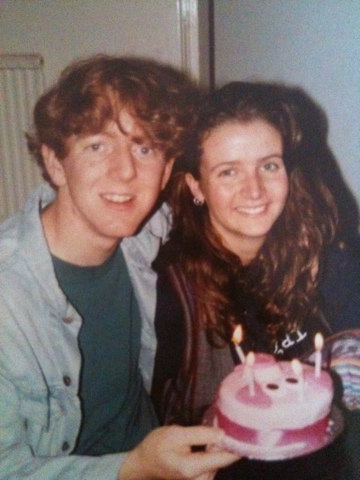