We take birthdays quite seriously in our house. We’ve never gone in for the big boozy birthday weekends, what with me being teetotal, but we do always make sure we take the day off work for our own birthdays and all of the kids’. (Which can be a big drain on annual leave if they all fall on week days!)

When I asked my husband what he wanted to do for his birthday, he said he wanted to go for a drive. Usually the purpose of going for a drive is to get somewhere, but for him the purpose was to DRIVE. He’s got a two seater Caterham car he recently built and he was desperate to take it out on a good run.

The problem with a two seater car for a family with three kids is that there always has to be an adult at home with the kids – so I don’t get to go out in it. And the kids go in it A LOT. (And argue about it even more.)

The car has been home for three weeks and I’ve had one trip round the block, abandoning the eldest for about three minutes while the younger two were busy with Cubs and Rainbows. I had a 15 mile round trip one day when the kids were at school.

And I tried to drive it myself – all 200m from my mum’s house. It kangaroo-ed all the way and I had NO IDEA why. It was like 21 years of my life had vanished and I was having my very first driving lesson. Only with a 10 year old in the passenger seat shouting to passers-by: ‘She can’t drive it!’

He decided he wanted to go to the Malverns. Now, the Malverns isn’t very far away, but I was nervous. The car is so low, so small, so fast and so, well, roofless. It’s vulnerable – and so are we. I considered not taking my camera with me because I thought I might lose it if we had an accident. Then I realised if we had an accident that would probably be the least of my worries. I also worried about feeling sick. I don’t get travel sick, but I can feel a little bit shaken after a long journey. And, yes, we’re not talking a long journey, but this is not a normal car.

He didn’t want to go up the motorway, he wanted to enjoy the drive, so we tried to drive up A roads. We got as far as the next town, then couldn’t find our way out. So ended up on the motorway.

Then had a discussion about whether we were supposed to go onto the other motorway at the next junction – I said we were and I was right. But the driver won, so we missed our junction. Then we came off at the next junction, so we still got our scenic drive. We could see the hills, we just weren’t entirely sure how to get to them.

When we got there I assumed we were going for a walk, because that’s what you do when you go to the Malverns, right? Not if you’ve got an interesting looking car with no roof, apparently. What if somebody nicked it?

So we compromised on a short walk and got back just in time to see the kiosk serving bacon sandwiches opening.

‘This is a good birthday,’ said my husband. ‘Driving, the Malverns and a bacon sandwich.’

Not forgetting the cold. My phone was telling me it was 13 degrees at home, so it was somewhere between 10 and 12 in the hills. The car is weird because it has heating which keeps your body warm while the wind batters your face. It’s like the very hot outdoor pool at Center Parcs, or putting ice cream on hot apple pie. I’d tied my hair in a ponytail but it was still flapping about like nobody’s business. So I had to come up with my own take on 1950s topless car glamour. Instead of a scarf, I put up the hood from my hoodie and tied it under my chin. Now if that isn’t glamourous, I don’t know what is.

We’d just got in the car to drive off again when an old man came over to chat. This is apparently a very common occurrence. As is being stared at. By everyone from small boys through to teenagers, middle-aged men and very old men. Not women, generally. We got gawped at every time we stopped for more than a second.

We drove a different wiggly way back home, through the hills with fantastic views, going fast on the bends. It was kind of like Top Gear or a car advert. With a woman with her hoodie tied up sat in it.

We didn’t go on the motorway at all. It took ages and I struggled to get out at the end. But it was fun. 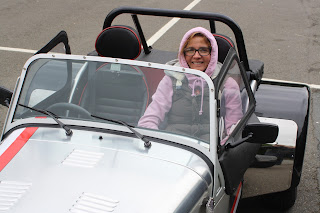 You can’t say that about many long, pointless journeys.