Let’s Pretend This Never Happened by Jenny Lawson (The Bloggess)

When I first signed up for a Twitter account earlier this year, I went through my friend’s list of who she was following and followed the ones that looked most interesting. I picked The Bloggess. Because of course I blog too and ‘bloggess’ is like ‘goddess’. Clearly she was the queen of blogging.

A few months later, I found out The Bloggess had written a book. When I was in Waterstones buying books for my kids’ friends, I saw this book that looked very similar to Caitlin Moran’s How to be a Woman. Let’s Pretend This Never Happened – The Bloggess’ book! It has a quirky cover, so I thought I would give it a go.

What can I say?! It is a hilarious and strange book and I absolutely loved it. It is very similar to How to be a Woman (another amazing book), but more American and even more weird.

Now I’m not keen on American books. An American book has to try so much harder than a British one to appeal to me. But this one did. Big time.

Jenny is a woman in her 30s, who grew up very poor in Texas. The book is Jenny’s autobiography or, more specifically, her memoirs – told through a series of events where things went wrong. Things going wrong are bread and butter for a blogger – but to most of us it’s burning the tea, not washing the kids’ school uniform or not buying them new shoes when they need them. Jenny grew up surrounded by wild animals – and they weren’t just in the nearby woods. The tales of her childhood are jaw-dropping.

She has battled mental ill health all her life, which makes her writing, and the stories she has to tell, so much funnier. We are laughing with her, not at her.

I like the bit where she met up with fellow bloggers and said ‘That’s the good thing about hanging out with bloggers. Most of them are kind of fucked up in the same way you are.’ Isn’t that the truth?!
If you don’t like swearing, avoid this like the plague. She used the word ‘fuck’ in all of its many forms artfully, but if you’re offended, best steal well clear!

But if you want a laugh out loud ride through Texas, where the gays keep their guns in ‘gun armoires’, it comes highly recommended. And I defy anyone not to fall slightly in love with the ever-patient Victor. The man must be a saint. 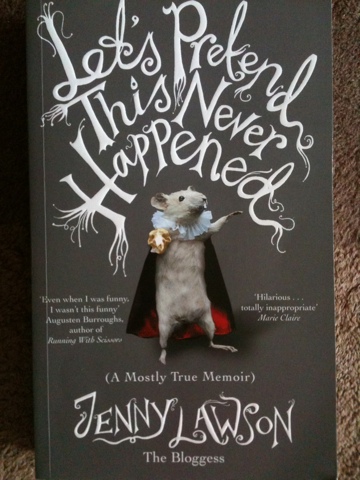