A new family member came into our lives a few days ago. He is very small. And he is green. Yes, he is a caterpillar. And his name is Colin.

He looks exactly like the Very Hungry Caterpillar. On a very tiny scale. And he doesn’t eat strawberries, oranges or cupcakes.

Against all the odds, he is still hanging on in there. Because after all, he is a caterpillar taken away from his natural habitat, living in a small plastic lunchbox with a variety of leaves which he may or may not be able to eat, as a food supply. And he is being cared for by a very loving 8 year old boy, with support from a couple of clueless parents and a well-meaning brother and sister.

My son found Colin on the way to his friend’s house round the corner. Colin was sat on a gate, so my son took him to show his friend. When I went to pick my son up, his friend followed us carrying a red plastic toy doctor’s case, while my son carried his Match Attax briefcase. I wasn’t sure what they were doing. I didn’t know about Colin. They said they were taking a caterpillar home. I assumed ‘home’ was where they’d found him, but, no, it was back to our house.

Colin was transferred from the red plastic doctor’s case into a small purple plastic pot, the sort babies and toddlers have their snacks in. With a leaf.

Shouldn’t he go outside? Back into the wild?

No, he was Colin, and he belonged to my son and this was his new home. Colin was surprisingly active. I wondered if he could escape from his purple plastic prison. Yes, he could. He was put back and had some white paper with a hole in stuck over the top of him. But it wasn’t sellotaped properly round the edges and he escaped again. And he was put back again.

The next morning, Colin was still with us. ‘Do caterpillars need a drink?’ asked my son.’Oh no,’ I said, with great authority. ‘They get the moisture they need from their leaves.’ But did I actually KNOW that? Had I researched it? Of course not, I was making assumptions.

I suggested that, to be sure he was getting moisture from his leaves, Colin should have a fresh leaf. So he did.

I was very impressed with the way my son cared for Colin. He checked on him every few minutes and would sit watching him crawl around his pot for ages. He was caring and concerned for his welfare.

Maybe he is ready for a real pet? We don’t have pets in our house. They are just too much responsibility and I’m not an animal lover. I am, however, a rabbit lover. I am forever saying to the kids, ‘one day we will get a rabbit’. We had a rabbit at home from when I was 9, then my husband and I had our own when we were ‘grown up’ (not so grown up at all, really). The last one died when no2 son was 15 months. I felt it was my fault, that I hadn’t cared for him properly, and I wouldn’t want to do that again. I considered another one at the time, but I got pregnant instead!

Before we knew it, we all started caring for and worrying about Colin. My husband knows nothing about wildlife. Nothing. Not insects, animals, birds, trees. Nothing. I don’t know how. I realise now that my Dad brought me up with a reasonable knowledge of the countryside and nature.

So we took matters into our own hands. We found Colin a larger home – a small lunchbox and put him a selection of leaves in, just in case we were giving him the ‘wrong’ leaves. My husband dripped the tiniest drops of water in the box, just in case he needed to drink. Even though the drips were tiny, I was convinced Colin would drown in them. See, I don’t know that much about nature after all.

When my son got home from school on Tuesday he thought Colin had died. But he hadn’t.

On Wednesday morning, my husband convinced my son that maybe it would be fairest to Colin to let him go. He agreed, but when it came to it, he couldn’t do it and burst into tears. My feelings were that if we’ve damaged Colin, as we almost certainly have, his chances in the wild would be no better than his chances in a plastic lunchbox. So if my son wants to keep him, he should.

Caterpillars like cabbages. So before school on Wednesday morning, with my son still tearful and undecided about whether to let him go, the other two kids ran to the allotment to pull a bit of leaf of one of our cabbages.

Colin is certainly a lot more sluggish and inactive than he was at first. But he is still with is, which is nothing short of miraculous. I hope he’s sluggish because he’s getting ready to turn into a butterfly. I fear it is because it is dying.

Either way, we are gearing ourselves up for my son experiencing loss for the first time. There are tears to come, but we have all enjoyed having Colin around while he has lasted.

The day after I wrote this, before I posted it, Colin sadly passed away. My son was in floods and the other two kids shed a tear. I had to fight the lump in my throat myself – more to do with my son’s love and care than the death of an actual caterpillar, you understand. I decided to leave the post as it was originally written, in Colin’s memory.

RIP Colin, you made a little boy very happy. 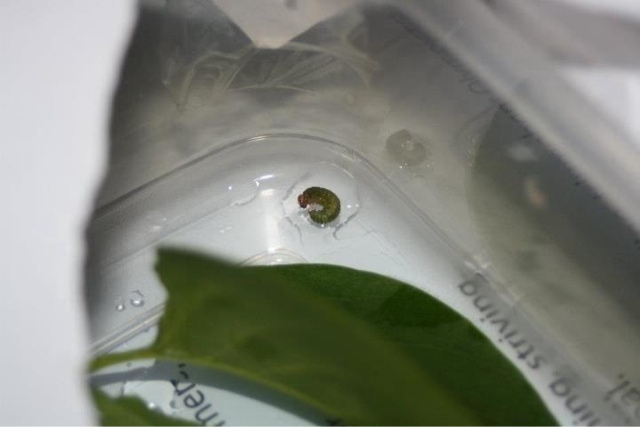