But not compared to the rest of the world, apparently.

Recently, not one, but two, mums in her class have made a big deal about the size of her feet. And, guess what, that is not acceptable and it’s none of their flipping business!

How can it ever by right to go up to a 6 year old girl, dressed beautifully in her best party outfit, and say ‘Oooh, LG, look at the size of you feet. What size are they? C is only an 8.’ Well, whoop-bloody-doo for C. If I wasn’t polite (like these women aren’t) I may have said ‘Well, actually an 8 is a BABY SIZE. How come she doesn’t fall over?’

On one of these occasions, the mums so fascinated by the enormity of my daughter’s feet got her to measure her feet against their own. Funnily enough, I wasn’t there when that happened, because I wouldn’t have allowed it. It is NOT ON.

So, feeling wound up, I posted an unusually ranty status update on Facebook (the mums in my daughter’s class are not my FB friends, apart from one who I totally trust). And I got some great responses – from mums, non-mums and a teacher. All giving me the same message – this is absolutely no-one else’s business.

One mum said ‘I would never comment on another child’s appearance including their shoe size.’ And she’s right. This is part of her appearance. Part of her body image. Something she could end up feeling bad about.

I had size 13 feet when I started school. I was quite proud of the size of my feet, but my Grandma used to make quite a big deal out of it. I remember her saying, and I think she was only half joking, that I should ‘bind’ my feet to stop them growing. My poor sister’s feet were (and still are) much bigger than mine. And she has had a complex about them all her life. She has squeezed her feet into size 8s and suffered with them all through adulthood.

Whatever we think about other people’s appearance, and we all do it, we shouldn’t say it out loud. Or at the very least we shouldn’t say it to that person, their close friends or family, or within earshot of any of them. Because this is how problems with body image can start.

If I think a child is too fat or too thin, I don’t say it. Very few people do. Well, they don’t say a person is too fat. Being too thin is apparently fair game. Another comment on my Facebook status was from my friend whose daughter is extremely slim – it’s her natural body shape. People think there is no harm in commenting on her size, yet it’s potentially just as damaging to a person’s self-esteem as people saying you are too fat.

Not in this case, but in most cases, we have control over our own and our children’s weights and being too fat or too thin can be harmful to health.

We have no control over the size of our feet. So please just keep your thoughts to yourself! 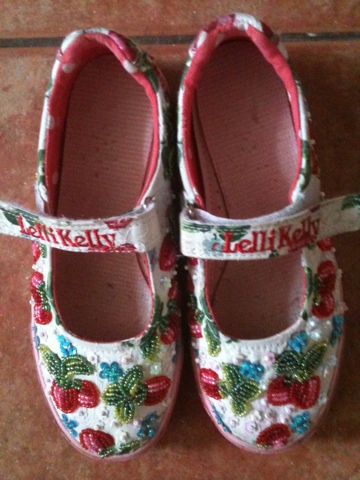