Don’t be put off by the slightly girly cover (girly covers put me off these days – I am many years over chick-lit), Afterwards by Rosamund Lupton is an amazing book.

It had me gripped (and in tears) by page 2. As a mother, the words ‘The school was on fire’ are going to get me every time. And they did.

And so it continued – an emotional rollercoaster (apologies for the cliche) as a woman, Grace, and her teenage daughter, Jenny, plus Grace’s sister-in-law, Sarah, try to piece together what caused the fire.

The fire happens at a primary school. Grace’s 8 year old son is a pupil and Jenny is a temporary teaching assistant. As the flames take hold, Grace realises Jenny is inside the building and runs in to rescue here.

There’s some nasty characters and a lot of suspects. Who has caused the fire? Was it deliberate? Was it targeted at Jenny? And will Grace and Jenny come out alive?

Ultimately, Afterwards is a story about love and about family and anyone with children will be moved by it.

Afterwards is written from a rather unusual point of view and I’m not going to spoil it by telling you what that is. But it’s something I’ve never come across before and it really works. It should be hard to believe, but it isn’t.

I actually saw the twist at the end, but it didn’t make it any less heartbreaking. My friends tell me they didn’t see it coming.

Easily as amazing as Lupton’s first book, Sister, which has a mega twist at the end I did not see coming! Sister also comes highly recommended. 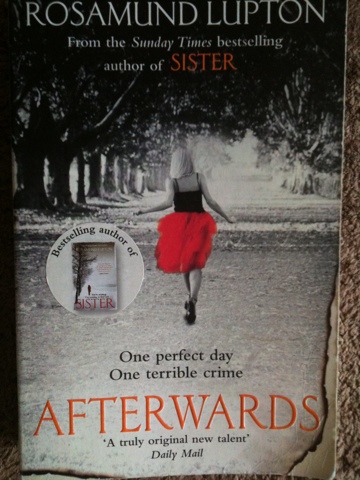