Not a great start

Home » Family » Not a great start

I suspect this school holiday isn’t going to be as good as the last one. February half-term was literally one of the best times I have ever spent with my children, so it was always going to be a hard act to follow.

The big difference is I HAVE TO WORK. Like I have to most holidays. It’s only two days, but it will break this first week up ‘nicely’.

Today was the first Monday in two years I failed to leave work on time. Thank goodness I didn’t have to get to school to pick the kids up. With it being the holidays, lots of people are off. I was the only old/ original/ real/ whatever you want to call it press officer in the room. There was a big situation kicking off and I was barely involved. I was the best candidate to deal with it, but I was doing The Web. I am crap at doing the web, but if I didn’t do it The Web Police might have been cross. Square peg. Round hole. That’s me.

So I left work feeling somewhat relieved and got home to three semi-comatose grumpy children slumped in front of various screens. They didn’t really acknowledge my presence, so embroiled were they with the telly and the computer. And the dishwasher wouldn’t open. The door is broken. As fast as we are trying to get things mended and replaced, they are breaking. My husband won’t be happy when he gets home.

Without thinking about it, I’d wolfed down 60g of Green & Black’s. I’m desperately trying to cut down and had done OK this weekend and thought I was doing OK today, but I wasn’t.

So I dragged my kids out for a quick walk. ‘But we’ve already been a walk!’ Well, I haven’t. I wanted fresh air and exercise to clear my head and hopefully snap them out of their screen-induced moods.

If proof was needed that my younger son had spent too long in front of a screen, I was subjected to a 20 minute monologue on the game he’d been playing. There were guns and flares and masters. He was on level 11. I don’t know what this game is, it doesn’t sound entirely suitable, but he assures me it is a children’s game. As soon as I get used to one game, such as Club Penguin, he moves on to the next thing, such as Moshi Monsters. Now he has moved on from Moshi Monsters and it seems he is playing a complete load of rubbish and filling his head with it.

When we get back, they stay outside to play rugby (and argue more) while I make the tea. I take a packet of spaghetti out of the cupboard. Unfortunately it is open. Before I know it, my kitchen floor resembles that ‘pick-up sticks’ game kids used to play in the 70s and 80s before the Wii was invented.

Tomorrow I will be off work (hooray!), but waiting in for a delivery (not hooray!). It could come any time between 9 and 6. This means potentially we won’t be able to do our very favourite school holidays activity of going to the cinema.

Can I rewind this holiday and start again, please?! 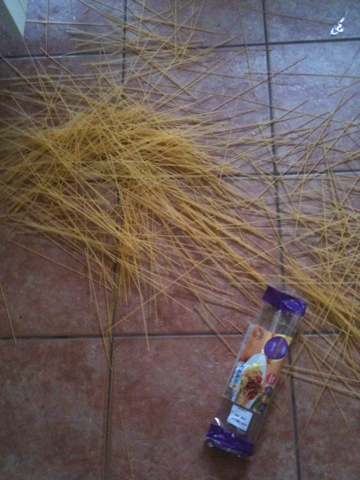