Birth of a beautiful girl

The most beautiful girl in the world came into my life six years ago today. It was love at first sight.

Unlike when her brothers were born, I actually had a computer when I had her. It’s the same sh*t one I’ve got sat on my desk now, although it doesn’t actually work any more. Luckily I managed to save this story before it finally bit the dust. So this is a shortened version of the birth story I wrote up at the time.

I had a show just as I was going to bed two days before my due date. I didn’t feel excited or nervous, I just felt annoyed. I didn’t want the baby to start coming at the end of the day as I didn’t want to be up all night and extra exhausted when she arrived. I slept all night with no contractions and spent the day waiting for something to happen. At around 12pm I had five contractions in the space of half of an hour and got quite excited, but then they stopped. Mum came and sat with me in the afternoon and we were both feeling fed up about the waiting.

About 5am I had my first five minute gap between contractions, they were alternating a five minute gap with an eight minute one. We decided when I had two consecutive five minute gaps we should get ready to go. This happened at five to 6 and I rang Mum to ask her to come to look after the boys. We set off for hospital at 6.45am.

We were allocated a midwife, Jean, and a student midwife, Hayley. Hayley did my initial checks and asked if I could do a wee. I couldn’t.

Hayley felt my stomach and concluded that the baby’s back wasn’t in quite the right position and she needed to be turned so her back was more to my stomach and less to my side. ‘You can give birth in this position, but it is quite uncomfortable. We need you on all fours or kneeling on the back of the bed to turn the baby.’ As it happens, we never actually got round to doing this. I felt a bit disappointed that they were more concerned with moving the baby than in it actually being born!

A couple of times I went to try and have the elusive wee. I had drunk absolutely loads. I waited until I’d just had a contraction and went into the bathroom, but as soon as I got there I seemed to get in terrible pain and I just couldn’t go. It was stressing me out. The contractions tailed off to every 10 minutes and they decided I should go for a walk. I thought they meant up and down the corridor, but they meant OUTSIDE THE BUILDING.

We got down in the lift, I stood for a few seconds and said I wanted to go back up – I was in too much pain. I was fed up, I didn’t even know when I was having a contraction any more, it just seemed to be constant pain. Having written on my birth plan that I didn’t want an epidural, at that point I would have happily had a caesarean. I just wanted the baby out, but I didn’t feel it was going to come out.

So I had to have a bath. A bath would either ease the pain and speed up the contractions or, God forbid, slow them down. I came off the TENS machine and went on the gas and air. I didn’t feel any relief when I climbed into the bath. I endured three or four contractions, which at least seemed to be coming a bit closer together, before I begged to be let out.

As I got out I had a contraction and I still had the awful uncomfortable feeling. I had no pain relief and stood there naked holding on to Hayley’s wrist for the duration of the contraction. Luckily I was her 25th birth, so hopefully she didn’t think I was completely mad. I was feeling pathetic and out of control. I whimpered ‘When will it come?’ She answered honestly that she didn’t know.

I knelt up on the back of the bed and Hayley reattached my TENS machine for me and then put the monitor on me to listen to the baby‘s heartbeat. I was gutted, I remembered the discomfort of the monitor from when I had my younger son. But actually that was the turning point for me. I realised I had been behaving a bit irrationally and I started to come out of it. I also realised why I might have been behaving irrationally – I was in transition!

Almost as soon as I was on the monitor, the contractions started coming thick and fast and suddenly I was in complete control again. At first I was taking the gas and air rather tentatively, but Jean encouraged me to take big lungfuls right from the start of the contraction so I would be feeling the full effect as the contraction hit its peak. I was breathing really well through the contractions which were pretty much one minute on and one minute off. I felt strong and focused. My husband had taken control of the TENS machine, which was now on full.

I wasn’t on the monitor long, half an hour at the most. I had to come off because on a couple of contractions I made involuntary grunting, pushing noises. ‘I think I’m ready to push’ I announced. Jean let Hayley take over, this was to be her first birth in charge. After I’d had a contraction she examined me just to make sure I really was ready – and I was! She told me I had to push, then pant to deliver the head gently.

The bag of waters was still intact and was bulging and ready to go and the baby’s head was just behind. Jean was going to check Hayley’s diagnosis, but there was no time. A contraction came and I pushed for all I was worth and the waters broke all over the bed, hitting the end of it.

As I felt the next contraction coming I took a bit of the gas and air, but then naturally stopped so I could concentrate fully on pushing. The baby’s head was showing and I panted to make sure the rest of it came out slowly and carefully. The last contraction came and I gave a massive push and out slithered this baby. It was so quick!

My baby was covered in quite a lot of white stuff and looked a good size and very solid. As they passed her over to me I saw she was definitely a girl. I was overwhelmed with love for her and pride of my achievement immediately.

I put my baby on my chest and let her wriggle around there until she found the food. After a few minutes of wriggling she found it and latched straight on and fed!

So that’s how my beautiful girl came into the world and now she’s 6! 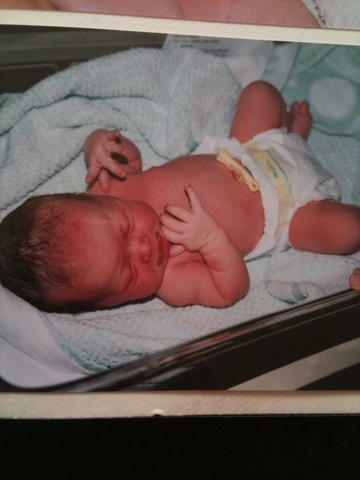