Hetty at the kennels

Home » Family » Hetty at the kennels

At the end of August, we went to our favourite place in the world – Padstow in Cornwall. And we took Hetty, our nine month old cockapoo puppy, with us.

Unfortunately we’d booked our holiday before we knew we were getting a dog, so we didn’t have dog friendly accommodation. We’d hoped to not put her in kennels, but the reality was that we had a no choice. Having failed to find somewhere at home, we booked her into kennels in Wadebridge, 15 minutes from Padstow. Of course, we could have just left her there all week, but the advantage of having her in Cornwall was that we could take her out with us every day.

At first glance, the kennels looked like the setting for a TV crime drama – a rundown farm in the middle of nowhere, with lots of abandoned buildings. But the man was friendly and we were reassured that two other people were checking their dogs in at the same time. The man had all our details, but took down the information from Hetty’s vaccination record too. Although the kennels provides food, it doesn’t do puppy food. It’s also not wise to suddenly change a dog’s food. So I had measured out and individually bagged up Hetty’s food for a week. We also took along her crate, blanket and a couple of toys, so she would feel more at home.

The kennels consisted of a number of outbuildings, each divided into individual compartments – somewhere between a shed a cage. They were spacious with an open area and a enclosed area for sleeping. Each dog had a large water bowl.

The man said he needed to be able to get Hetty’s lead on her himself. But Hetty wasn’t happy. She pulled so hard that she slipped free of her harness, then she ran away. We chased her, but gently, so she wouldn’t think it was a game and run even further and faster. It took five minutes to catch her. By which time she was getting dangerously close to the chickens.

The man described her as having ‘zero recall’, which is both very true and embarrassing. Hetty has many good qualities, but coming back when called is not one of them.

Hetty wasn’t happy about getting into her kennel. It was really difficult for my husband to put her down and get out of the door, although the doors are purposely designed to stop dogs escaping.

My poor daughter was in tears about it all.

All four of us went to collect her the next morning and she nearly burst with excitement – wagging her tail, jumping around and madly licking. She even let out a bit of wee, which she used to do as a baby puppy, but hasn’t done for a long time.

The man said she’d been fine, apart from she’d refused to go for a walk using their leads and insisted on having her own lead!

In the car heading back to Padstow, she seemed a bit nervous and kept checking to see if we were all there.

When we dropped her off that evening, she was a lot better, apart from she barked at the man. But she did then sit on his lap and let him attach her lead.

In the morning, the ladies at the kennel were singing Hetty’s praises – saying how intelligent she is. They were laughing because they said she seemed so human. Again, she’d insisted on only using her own lead.

Walking round Padstow and heading out for the beach, Hetty seemed quite tired. No doubt it’s hard to sleep at the kennels. If one dog hears a sound and barks, they will wake the others up and all the other dogs will be barking. But she still had plenty of energy once she got to the beach!

When we took her back to the kennels, she only pulled back very slightly as my husband put her back in her kennel. She was definitely getting used to the routine. 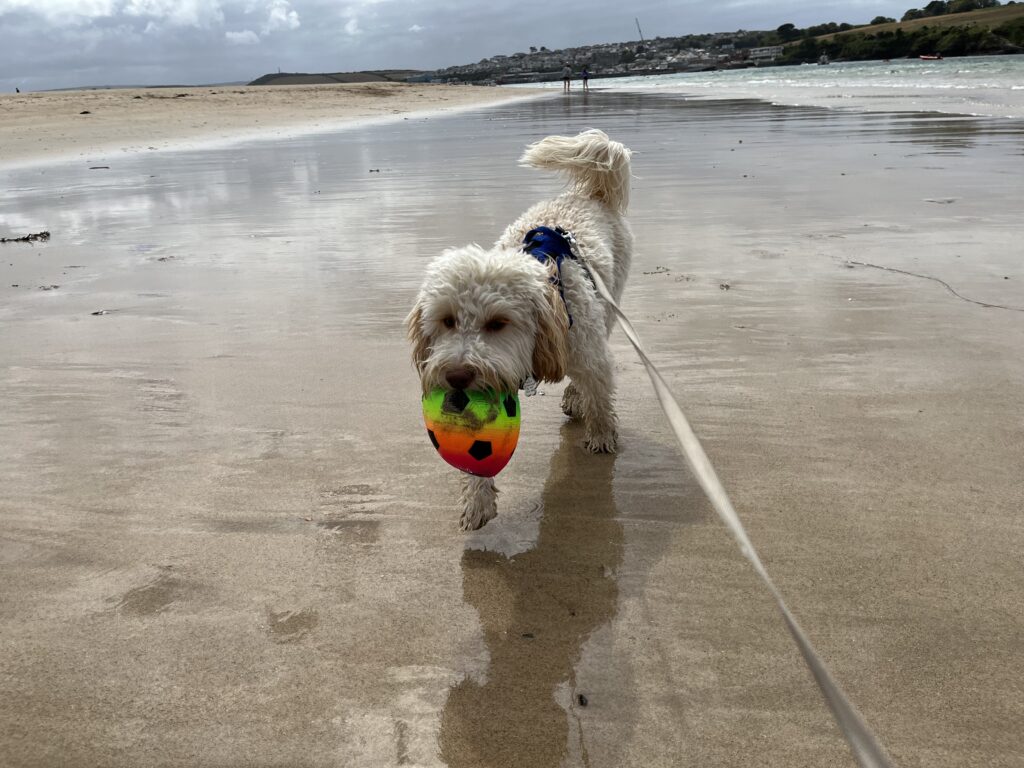 The next morning, she was wet from her morning walk in the rain and seemed very tired. She hadn’t eaten her breakfast, so the man gave it to us to take with us. I wasn’t worried about her not eating, as some days she will take hours to eat her breakfast at home. But she ate it all very quickly from my hands while sat in the car.

By this point, Hetty seemed to know her routine. She was very happy to see us in the morning and reasonably OK about going back in the evening.

From our point of view, it was of course a bit of a hassle. A 15 minute drive to the kennels and a 15 minute drive back twice a day is quite a lot of time out of the holiday. I’m insured on my husband’s car, but none of us want to see me attempt to drive it down Cornish roads, so he had to do every single journey, while the rest of us could pick and choose.

Having her at kennels on holiday with us worked pretty well, but we wouldn’t choose to do it again. We’ve already booked a dog friendly cottage for next year!